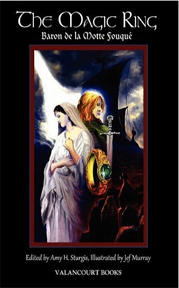 It is the twelfth century, the era of Richard the Lion-heart and the Third Crusade. Along the Danube, the tranquil world shared by the young squire Otto and his cousin Bertha is changed forever when they witness a knightly contest for possession of a magic ring. Soon both are drawn into a quest that transforms them and endangers all they love. The resulting adventures lead each to different paths of enchantment and peril, from the mysteries of Moorish Spain to the birthplace of Norse mythology. While navigating an ever-changing sea of allies and foes, both natural and magical, the two seek love, honor, survival, and a ring that possesses more power than either can possibly understand.

A seamless blend of medieval quest, epic fantasy, and Gothic nightmare, The Magic Ring draws on an impressive host of inspirations, such as Germanic folk tales and Icelandic sagas, Arthurian romance and Gothic horror. Its author, Baron de la Motte Fouque, was a literary star in the constellation of German Romanticism, and with his great masterpiece, The Magic Ring, he paved the way for later luminaries of fantasy such as William Morris, George MacDonald, and J.R.R. Tolkien.

This new edition includes the unabridged text of the original 1825 three-volume edition, as well as an introduction by Amy H. Sturgis, and more than forty original illustrations by award-winning fantasy artist Jef Murray.