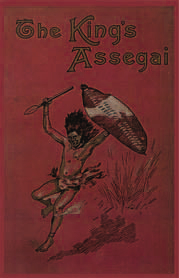 Set in the turbulent early 1800s before British colonisation in South Africa, The King's Assegai (1894) is a gripping narrative of a young Zulu warrior's passage through crisis. Together with an army of fellow Zulus, Untuswa flees the harsh rule of the Zulu king, Shaka, to establish a new nation under a new leader, Umzilikazi.

Untuswa quickly earns the King's favour and is appointed his chief messenger; emboldened by this honour, he asks the King's permission to marry. Laughing, the King promises to give Untuswa not only permission to marry, but also his assegai--his spear, which in his hand is symbol of his authority--but only if Untuswa performs a deed braver and bolder than any he has heard of. Untuswa, determined to claim performance of this promise, fights ferociously against enemy tribes, confronts the terrifying magic of the witch-doctors, and risks death at the hands of cannibals in the mountains. But these dangers are nothing compared to the fate that awaits him when he does the unthinkable--elope with the King's intended bride.

The first of Bertram Mitford's tetralogy of historical Zulu novels, The King's Assegai is remarkable for being a novel written by a white man, but peopled entirely by African characters. Based on Mitford's own experiences in South Africa and local oral tradition, The King's Assegai is not simply a great British novel about Africa, but, as Gerald Monsman argues in his introduction, a great African novel. Long out of print and neglected, The King's Assegai deserves a place alongside H. Rider Haggard's Nada the Lily as precursor to later established African classics such as Chinua Achebe's Things Fall Apart.