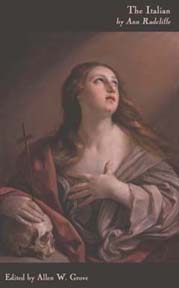 In The Italian (1797), Ann Radcliffe pits a scheming noblewoman and a ruthless monk against young lovers trying to bridge seemingly insurmountable class differences. The scenes of sublime nature, mysterious groans, corrupt ecclesiastics, isolated fortifications, and Inquisitorial torture reveal eighteenth-century Gothic fiction at its finest.The Italian stands as the final and darkest work of England's most successful Gothic novelist, and it presents Radcliffe at the peak of her literary skills.

The Valancourt Books edition includes a carefully annotated and edited first edition text with a substantial introductory essay on the literary, historical, and biographical contexts of the novel. The appendix features a map of locations in The Italian, three complete Gothic stories by Radcliffe's contemporaries, and essays on terror fiction by Nathan Drake and John and Anna Aikin.

Ann Radcliffe (1764-1823) was the most popular novelist of the 1790s and the chief exponent of Gothic fiction.  She remains the greatest writer of poetic prose in the English language, and the beauty of her descriptive passages has rarely, if ever, been matched.  Her novels include A Sicilian Romance (1790), The Romance of the Forest (1792), The Mysteries of Udolpho (1794), The Italian (1797), and Gaston de Blondeville (1826).

Allen W. Grove is Associate Professor of English at Alfred University, where he teaches courses in the Gothic and Victorian literature.  He has previously edited The Cavern of Death and The Witch of Ravensworth for Valancourt Books.