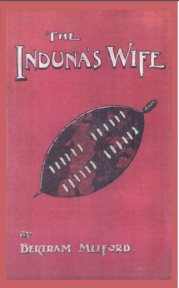 The third of Bertram Mitford's tetralogy of historical novels featuring the Zulu peoples, The Induna's Wife (1898) continues the thrilling saga of Untúswa and his sorceress wife, Lalusini. After having repeatedly saved the Matabele king, Umzilikazi, Untúswa has risen to the post of the king's chief induna. But when Umzilikazi begins to suspect that Untúswa is eyeing his throne, not even Untúswa's again saving his people by defeating a bloodthirsty ghost bull can guarantee his safety.

He flees to join the Zulu king, Dingane, and quickly becomes one of his chief generals. But the Zulus find themselves threatened by encroaching white Boer settlers, as well as by divisions from within their own ranks. And when Dingane has a party of whites put to death, the Boers' retaliation is swift and terrible, and may mean defeat for the Zulu nation….

An exciting blend of adventure, romance, history, and Gothic horror, The Induna's Wife was also a highly timely book, appearing shortly after the 1896-97 Matabele rebellion against the British. Told from Mitford's sympathetic point of view, the novel challenged imperialist and racist attitudes of the day. This new edition features a new introduction and notes by Gerald Monsman, the foremost Mitford scholar, as well as contextual appendices and the original illustrations from the first edition.