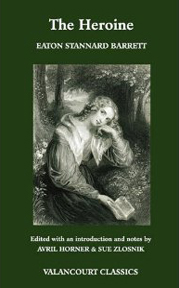 
Young Cherry Wilkinson, the daughter of a farmer, has read one too many Gothic novels. And when she discovers a mysterious fragment of parchment and an antiquated portrait in her father's desk, she becomes convinced that she is a heroine and an heiress, and that the farmer is not her father, but instead an assassin with designs upon her life.

Renaming herself Cherubina, she deserts her home and sets off on a mad romp across England, determined to recover her lost domains and unravel her true parentage. But after a series of madcap and hilarious adventures, she comes to find that modern-day English law and society do not always permit a young lady to behave like a character out of a romantic tale. And when a handsome but dissolute young actor learns of Cherry's father's wealth and her mania for Gothic novels and styles himself Lord Montmorenci in an attempt to deceive her into a marriage, Cherubina will need all of her heroine's wit to defeat the nefarious plot!

A brilliant comic novel that went through numerous editions in its time and earned widespread critical acclaim, The Heroine (1813) has recently been badly neglected and has been out of print for almost a century. This edition features a substantial new introduction by internationally known Gothic scholars Avril Horner and Sue Zlosnik, the unabridged text of the first edition, and detailed endnotes.

"I finished The Heroine last night and was very much amused by it. It diverted me exceedingly. I have torn through the third volume; I do not think it falls off. It is a delightful burlesque..." - Jane Austen

"Everybody has read [The Heroine]. There is no one so superlatively unhappy as not to have done this thing. But if such there be - if by any possibility such person should exist, we have only a few words to say to him. Go, silly man, and purchase forthwith 'The Heroine: or Adventures of Cherubina.' There are few books written with more tact, spirit, näiveté, or grace, [...] and none more fairly entitled to rank among the classics of English literature than the Heroine of Eaton Stannard Barrett." - Edgar Allan Poe, in The Southern Literary Messenger (1835)