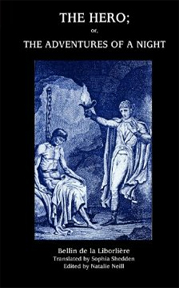 The Hero; or, The Adventures of a Night (1813)
Bellin de la Liborlière, Edited by Natalie Neill

The French Revolution is over, and Mr. Dob, a tradesman made rich by the Revolution, has decided to start a library of the novels and romances of the day. But quickly finding himself bored with the didactic and moralistic tales of the eighteenth century, Mr. Dob's life is changed forever when his friend Dubert presents him with a collection of Gothic novels by Ann Radcliffe, Matthew Gregory Lewis, and others. He pores over them obsessively, and comes to wish that he, too, could be the hero of a Gothic romance.

One night, he gets his wish, when he is visited by the ghost of a man he had killed in a duel and subsequently awakens to find himself in a mysterious Gothic castle populated with spectres, skeletons, monks, and other Gothic paraphernalia. During the hilarious episodes that ensue during his "Adventures of a Night," Mr. Dob comes to find that being the hero of a Gothic tale is not quite what he had expected.

First published in French in 1799 when Bellin de la Liborlière was in exile, The Hero is a clever pastiche of the works of Radcliffe, Lewis, George Moore (and, ironically, of Bellin de la Liborlière's own Gothic novel, Célestine). This edition follows the first British edition, published in 1813, and translated by Sophia Shedden, Matthew Gregory Lewis's sister. Also featured in this edition are explanatory notes and an introduction by Natalie Neill, in which she discusses the ways in which The Hero serves as an example of the interchanges between British and Continental Gothic fiction and how it paved the way for other more famous Gothic parodies like Peacock's Nightmare Abbey and Jane Austen's Northanger Abbey.