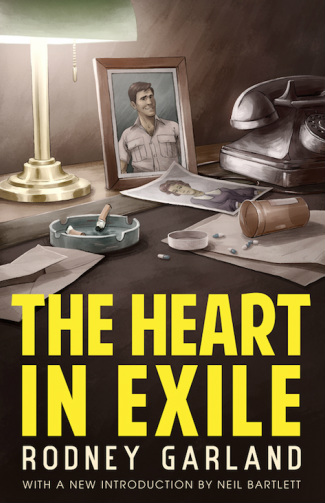 Julian Leclerc, a handsome and talented young barrister, has been found dead of an apparent overdose of sleeping pills. The verdict is accidental death, but his fiancée, Ann Hewitt, suspects there’s something more to the story. As the grieving woman recounts the details of Julian’s tragic end to psychiatrist Dr. Tony Page, he listens with acute interest—but not for the reason she thinks. Years earlier, he and Julian had been lovers, and now, disturbed by the circumstances of his friend’s demise, Tony sets out to uncover the truth. His quest will take him from the parties and pubs of the gay underworld of 1950s London to Scotland Yard and the House of Commons as he uses his shrewd and penetrating insight to find who or what was responsible for Julian’s death. But he may discover more than he bargained for—about Julian, and himself. . . .

First published in 1953, Rodney Garland’s noir thriller The Heart in Exile is both a groundbreaking classic of gay fiction and the first gay detective story. Long unavailable, Garland’s famous novel returns to print at last in this edition, which features a new introduction by Neil Bartlett.

“So effective is the author’s treatment . . . that he manages to bring home in a remarkable manner the suffering of the homosexual. . . . It took real courage to write this story, plus a profound insight into human feelings and sensitivities.” – Frank G. Slaughter, New York Times

“A sad, serious first novel called The Heart in Exile cannot fairly be ignored. . . . Its detached picture of barren tragic love and desire in a furtive fantastic ‘underground’ sector of London can arouse no disgust but only a deep pity coupled with a new understanding.” – Marghanita Laski, The Observer

“A completely honest story of homosexual life in London. . . . It makes no attempt to defend or condemn. A well-written work.” – John Betjeman, Daily Telegraph

Rodney Garland was the pseudonym of Adam de Hegedus, about whom little is known; the few available details of de Hegedus’s life are recounted in the 1995 Millivres reprint of The Heart in Exile. Born in Budapest in 1906, de Hegedus came from a middle-class, intellectually inclined family and originally intended to pursue a life in the Hungarian diplomatic service. Visiting London on a short stay in 1927, he decided instead to follow a career in journalism, and, after a stint in Paris, where he claimed André Gide as a friend, he returned to London and settled permanently.

De Hegedus served briefly in the Second World War before a nervous breakdown led to his discharge; afterwards, he worked as a van driver and resumed his writing career. Under his own name, he published several volumes of autobiography, fiction, and nonfiction, including Hungarian Background (1937), Don’t Keep the Vanman Waiting: A Chapter of Autobiography (1944), The State of the World: Reflections on Peace and War in our Time (1946), Rehearsal Under the Moon (1948), Strangers Here Ourselves (1949), Home and Away: Notes on England after the Second World War (1951), and Struggle with the Angels: A Novel (1956). But his sole success was The Heart in Exile (1953), published pseudonymously, which ran into at least four London editions and was also published in America and reprinted several times in paperback.

De Hegedus was apparently a lonely man, and his end remains shrouded in obscurity. It is believed he committed suicide in London in 1958.