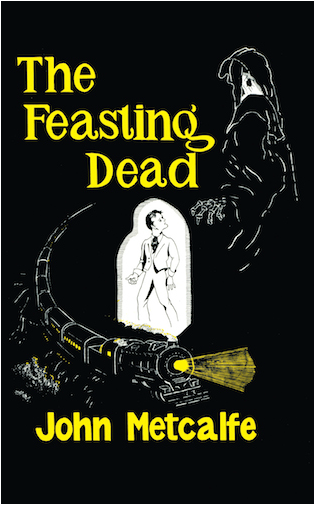 Something is wrong with Colonel Habgood’s young son Denis. Some mysterious force seems to be sapping his physical health, and his behaviour has become oddly evasive and deceptive. Habgood suspects the pernicious influence of Raoul, a sinister handyman with whom Denis has become infatuated, believing that the man may be corrupting and defiling his son. But even after Raoul’s departure, the troubles continue, and Denis’s strength continues to wane. In an old book of medieval legends, his father finds a possible, if implausible, answer in stories of a nameless horror from beyond the grave that feasts on the young in order to return to life. Or could what’s happening to Denis have any connection to an unexplained death in the attic turret nearly eighty years ago? And isn’t there something strange about the scarecrow out in the fields, which seems, barely perceptibly, to have moved...?

Originally published in a limited hardcover edition by the legendary Arkham House, John Metcalfe’s The Feasting Dead (1954) is worthy of being ranked alongside The Turn of the Screw and the works of M. R. James, L. P. Hartley and Robert Aickman. This new edition of this classic novella, previously available only in expensive secondhand copies, will allow modern readers to rediscover the unjustly neglected Metcalfe (1891-1965).

(William) John Metcalfe was born in Heacham, Norfolk in 1891, the son of William Charles Metcalfe, an author of sea stories for boys. Metcalfe graduated with a degree in philosophy from the University of London in 1913 and for the next two years, until the outbreak of the First World War, he taught in Paris. In 1914, he joined the Royal Naval Division and fought in the war but was invalided out in 1915; two years later, he enlisted again with the Royal Naval Air Service and in 1918 obtained a commission and served as an armament officer in the Royal Air Force.

After the war, Metcalfe obtained a post as an assistant master at a London school and began to write. His first book, The Smoking Leg and Other Stories, was published in 1925 and is highly regarded among connoisseurs of weird and supernatural tales. Another collection, also containing several horror stories, Judas and Other Stories, followed in 1931. Metcalfe also wrote a handful of novels in other genres.

In 1928, Metcalfe emigrated to New York and in 1930 married the American novelist Evelyn Scott, a prominent figure in the 1920s and ’30s American literary scene. In 1939, Metcalfe returned to military service with the British Royal Air Force and later again returned to the United States, where he taught at schools in Connecticut and New York. After the death of his wife in 1963, Metcalfe suffered a breakdown and was hospitalized; he died in 1965 after a fall.