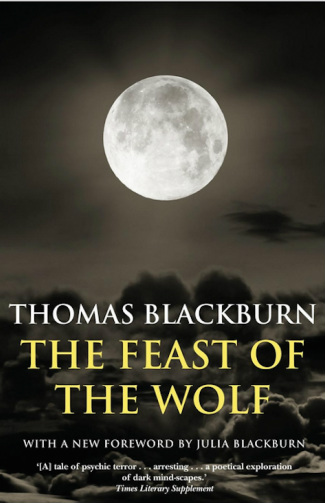 Simon and Laura Armstrong's marriage is on the rocks. His drinking and abuse of prescription drugs are getting worse and blackouts and violence are occurring with greater frequency. Laura believes things are going to get better: Simon has just been appointed to an important post in the university's English department, the couple are adopting a daughter, and Simon has almost finished work on an important new book, The Cult of the Vampire. Knowing of Simon's vampire fixation, his friend Dr Charles Abbott introduces him to a patient of his, a beautiful and bewitching young woman named Stella Johnson, who is convinced she has been bitten by a vampire and can no longer see her reflection in a mirror. But Abbott cannot foresee the ultimate consequences of bringing Simon and Stella together, or the violence and tragedy that will ensue. . . .

The only novel by noted poet Thomas Blackburn (1916-1977), The Feast of the Wolf  (1971) is a strange and unique take on the vampire myth. This edition, the first since the book's original publication, includes a new foreword by the author's daughter, Julia Blackburn, herself an acclaimed writer, who explains how the novel reflects in part her father's own struggles with mental illness and substance abuse.

'A delightful surprise for fans of the macabre. Simon Armstrong descends into a world of vampirism, lycanthropy, and more . . . Or, is it a more prosaic though no less terrifying descent into madness?' - John Pelan, editor of The Century's Best Horror Fiction 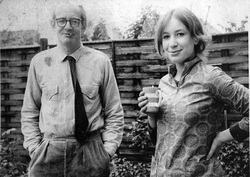 Thomas Blackburn (1916-1977) had three great loves: mountaineering, English literature, and the writing which he used as a passionate sounding board for his own process of self-discovery. He published eleven books of poetry in which he spoke with an increasingly direct voice about his private demons and his spiritual quest towards an inner resolution—something which he did manage to achieve before his death. His autobiography A Clip of Steel (1969) provides a brilliant and unsparing self-portrait and his one novel, The Feast of the Wolf (1971) is also, in its way, an autobiographical study.
Valancourt Books | PO Box 17642, Richmond, VA 23226 | 804.873.8528 | email
Copyright © 2022 by Valancourt Books, LLC. All rights reserved. Valancourt Books® is a registered trademark of Valancourt Books, LLC.
Banner art by M.S. Corley