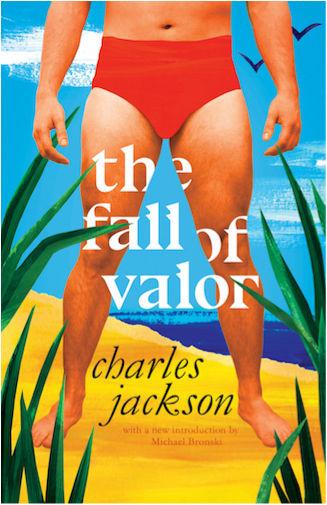 Charles Jackson (1903-1968) achieved international success with his first book, The Lost Weekend (1944), a groundbreaking novel about alcoholism that sold more than 600,000 copies and was adapted for an Academy Award-winning film version. Jackson followed this triumph with a novel that was even more daring, The Fall of Valor (1946), arguably the first major American novel to deal openly with the theme of homosexuality.

The Fall of Valor is an unflinching portrayal of a marriage that has faded to a mere duty. John and Ethel Grandin take a summer vacation to Nantucket with the hope of recapturing the happiness they felt in the early days of their relationship. But instead the holiday blasts their marriage wider apart than ever when John falls hopelessly in love with a handsome marine captain.

​This edition features a new introduction by Michael Bronski, who argues that Jackson’s novel deserves rediscovery and a place alongside later classics such as Gore Vidal’s The City and the Pillar, Norman Mailer’s The Naked and the Dead, and the works of James Baldwin.

“A finer and more skilful work than [The Lost Weekend] . . . a milestone in our literary progress.” – Saturday Review

Charles R. Jackson was born in 1903 in Summit, New Jersey. He graduated from Newark High School and briefly attended Syracuse University, dropping out in his freshman year following a sexual encounter with a member of his fraternity, an event he later fictionalized in The Lost Weekend (1944). After high school, Jackson worked as an editor for the local newspaper, the Newark Courier, and also worked at bookstores in Chicago and New York before falling ill with tuberculosis. From 1927 to 1931, Jackson was confined to sanatoriums, including two years in Davos, Switzerland. Though he was eventually cured, his battle with tuberculosis cost him a lung and was a catalyst for his alcoholism.

Returning to New York at the height of the Great Depression, Jackson had difficulty finding work and getting his writing published, leading him to drink more heavily. But by the end of 1936 he was sober and working as a Columbia Broadcasting scriptwriter, and in 1938 he married Rhoda Booth, who, along with his brother Frederick, had helped him to recover from alcoholism. Jackson’s first story was published in 1939, and after leaving CBS he worked as a freelance writer until the publication of The Lost Weekend in 1944. That novel, which told the story of a writer’s struggles with alcohol addiction, catapulted Jackson to critical and financial success. The book sold over 600,000 copies, was translated into fourteen languages and was adapted by Charles Brackett and Billy Wilder for an Academy Award-winning 1945 film version.
​
Jackson followed up this triumph with The Fall of Valor (1946), which sold well but received mixed reviews, with some critics expressing admiration for his literary skill but disgust over the book’s frank treatment of homosexual themes. A third novel, The Outer Edges (1948), was less successful, and by 1950, Jackson, who had been sober for over a decade, had begun to drink heavily again. He published volumes of short stories in 1950 and 1953 but then largely vanished from the literary scene until A Second-Hand Life (1967). This novel reached the bestseller lists but was received poorly by critics. Disappointed by the novel’s reception and his own declining health, Jackson attempted suicide several times and fatally overdosed on barbiturates in September 1968.