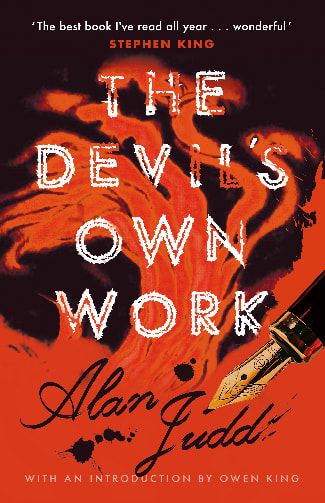 After Edward, a rising young author, pens a savage review of the new novel by the world-famous O.M. Tyrell, he is surprised to receive an invitation to visit the old man at his villa in the south of France. The night of their meeting, Tyrell dies, and soon after, Edward’s career mysteriously starts to soar as he earns fame, fortune and critical acclaim. But despite his achievements, Edward seems haunted, even tormented. His friend, the narrator, begins to put together the pieces of the story: an ancient, inscrutable manuscript, a beautiful, ageless woman who attaches herself to whatever writer possesses it, and a bargain to achieve success at a terrible price . . .

Winner of Britain’s prestigious Guardian Fiction Prize, Alan Judd’s modern classic The Devil’s Own Work (1991) is, as Owen King writes in the new introduction to this edition, “a perfect novel about the demonic possession that is literary ambition.” This edition also features a new afterword by the author, in which he reveals the inspirations for this haunting tale.

“More chills in its little length than in a whole shelf of bestsellers.” – Stephen King

“At once moral fable, cautionary ghost story and inspired attack on the whole hellbent drift of modern letters, this is a splendid tale, splendidly told, which Ford or Henry James would have been glad to have written.” – Robert Nye, Guardian

“Wry and insightful . . . toys with the notion of demonic possession but becomes a thoroughly realistic and highly original story of revenge; a chilling cautionary tale.” – Elaine Kendall, Los Angeles Times

“It is seldom that a novel demands such attentive reading; and seldom that a reading is so amply rewarded. Ford would have been proud to have such a disciple.” – Times Literary Supplement (London)

Alan Judd is a novelist and biographer who has previously served in the army and the Foreign Office. Chosen as one of the original twenty Best Young British Novelists, he subsequently won the Royal Society of Literature’s Winifred Holtby Award, the Heinemann Award and the Guardian Fiction Award; he was also shortlisted for the Westminster Prize. He was in his spare time the Spectator’s motoring correspondent and is currently a comment writer for the Daily Telegraph. He lives in Sussex with his wife and daughter.

Owen King is the author, most recently, of the novel Double Feature. His work has appeared in such publications as Grantland, The New York Times Book Review, One Story, and Prairie Schooner. He is married to the novelist Kelly Braffet.