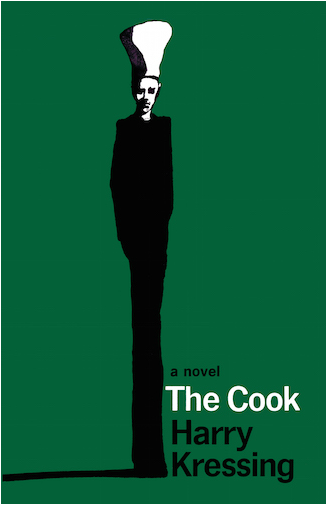 The Cook opens with Conrad, nearly seven feet tall, gaunt, and dressed all in black, arriving on his bicycle in the town of Cobb. He quickly secures a job as cook for the wealthy Hill family, winning their hearts and stomachs with his delectable dishes, and before long he has everyone around him eating out of his hand. But Conrad has a sinister, inscrutable plan in view, and after becoming master of their palates, next may be their souls . . .

A mouth-watering blend of delicious black humor and Kafkaesque horror story, The Cook (1965) is a dark fable "beginning in a vein of innocent fairy tale and ending with satanic revels" (The Observer). Long out of print, this cult classic returns in a new edition featuring Milton Glaser's iconic dust jacket art from the first edition.

"I have much enjoyed The Cook, for I am very fond of Satan. My congratulations to Mr. Kressing on his achievement."—John Fowles

"I haven't been so gripped by any first novel since Lord of the Flies."—Irving Wardle, The Observer

"A fable, part diabolique, part diversion ... high originality, some style, and a come-on which assures that it will be read at one sitting."--Kirkus Reviews

Harry Kressing is the pseudonym of Harry Adam Ruber. He was born in New York in 1928, the son of Harry and Jean Ruber. He attended Indiana University and went on to be a lawyer and also served in the U.S. Air Force. Little is known about Ruber, though he and his wife apparently lived for some time on the west coast of Ireland and also in London, where he researched at the London School of Economics. In late 1980s, Ruber relocated to Minnesota, where his elderly father lived, and died in there in December 1990.