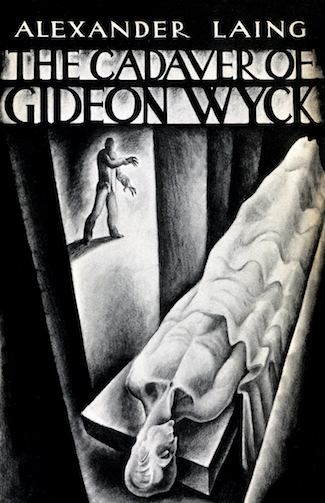 Strange mysteries abound in a small Maine town. Why did the brilliant, but cruel, Dr. Gideon Wyck perform an unnecessary amputation on one of his patients? Why does that patient now insist that black devils are trying to steal his soul? What is behind the series of monster babies being born to apparently normal, healthy women? And when Wyck is found dead under peculiar and inexplicable circumstances, who is responsible--and why?
​
The Cadaver of Gideon Wyck, Alexander Laing's odd hybrid of horror, crime and science fiction, was an unlikely bestseller and critical success when first published in 1934, and it was later selected by Karl Edward Wagner as one of the top horror novels of all time. This new edition reprints the unabridged text of the first edition along with a reproduction of its dust jacket art and frontispiece by Lynd Ward.

“Abnormalities and perversions . . . demon-belief, unnatural crimes, strange experiments . . . Not for the squeamish, but it is so well done that it carries suspense and is morbidly fascinating.” – Kirkus Reviews

Alexander Laing was born in Great Neck, Long Island, New York in 1903. He attended Dartmouth College, but dropped out before graduation to become the Technical Editor of Radio News. In 1926 he shipped as an ordinary seaman on the S.S. Leviathan, bound for Southampton, England, and spent two years at sea. He then returned to Dartmouth, becoming a tutorial advisor in the English Department in 1930. His first two books, volumes of poetry, were published in 1927 and 1928, and the following year he was awarded the Walt Whitman Prize for poetry. He turned to fiction in 1930 with End of Roaming, a fictionalized account of his own childhood and student life. Laing finally earned his degree in 1933 and remained close to Dartmouth for the remainder of his career, retiring in 1968 as Professor of Belles Lettres. Laing was best known for his seafaring tales, the most popular of which was The Sea Witch (1933), though he is remembered by horror connoisseurs as the author of The Cadaver of Gideon Wyck (1934), a bestseller that Karl Edward Wagner later cited as one of the all-time best science fiction horror novels. Laing died in 1976.
​
Copyright © 2021 | PO Box 17642, Richmond, VA 23226 | 804.873.8528 | email
Banner art by M.S. Corley