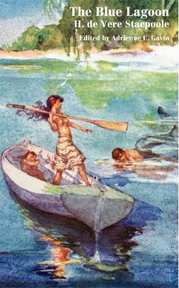 "Early in 1907 one night, lying awake and pondering on the extraordinary world we live in, the idea came to me of what it must have been like to the cave men who had no language and for whom a sunset had no name tacked on to it, a storm no name, life no name, death no name and birth no name, and the idea came to me of two children, knowing nothing about any of these things, finding themselves alone on a desert island facing these nameless wonders." Thus Henry de Vere Stacpoole described the inspiration for his runaway bestseller of 1908, The Blue Lagoon.

Arthur Lestrange embarks on a sea voyage for his health, taking with him his young son Richard and niece Emmeline. But when the ship catches fire and its passengers flee in lifeboats, the family becomes separated, and the two children wash ashore on an uninhabited island in the South Pacific. Accompanied only by an old Irish sailor, Dick and Em must learn to adapt and survive in their new home. But the idyllic beauty of their tropical island belies the danger that surrounds them as they come to terms with forces they cannot understand: life, death, and their growing love for one another.

A huge success on both sides of the Atlantic when first published, Stacpoole's romance returns to print in this first-ever scholarly edition by Adrienne E. Gavin. This edition features an introduction, notes, and a chronology of Stacpoole's life and career, as well as the unabridged text of the first edition and a cover illustration by Willy Pogany from the rare 1910 edition. As Professor Gavin notes in her introduction, Stacpoole's tale of escape from the pressures of modern life and return to a simple life close to nature has lost none of its appeal in the century since its publication; in fact, it may be more relevant today than ever.