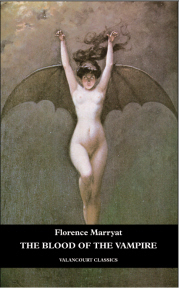 The Blood of the Vampire (1897)
Florence Marryat, Edited by Brenda Hammack

Miss Harriet Brandt, daughter of a mad scientist and a voodoo priestess, comes of age and leaves her home in Jamaica for the first time, travelling to Europe.  Beautiful and talented, Harriet will gain the affections of many of the men and women she meets and a bright future seems assured for her.

But there is something strange about Harriet.  Everyone she gets close to seems to sicken or die.  Doctor Phillips has a theory: the blood of the vampire flows through Harriet’s veins, and she is draining the life out of those she loves.  Are the misfortunes that seem to follow Harriet merely coincidence?  Or is she really afflicted with the curse of the vampire?

One of the strangest novels by the prolific Florence Marryat (1837-1899), The Blood of the Vampire was the “other vampire novel” of 1897, appearing the same year as Dracula.  Marryat’s novel is fascinating not only for its sensational plot and bizarre characters, but also because of its engagement with many of the issues that haunted the late Victorian imagination, such as race, heredity, women’s roles, Spiritualism, and the occult.  This edition includes the unabridged text of the exceedingly rare 1897 Hutchinson first edition and a new introduction by Brenda Hammack. 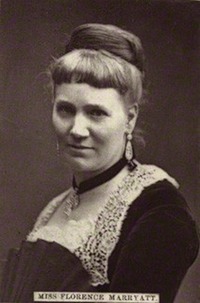 Florence Marryat (1833-1899). Praised by the New York Times as “one of the most prolific writers of our time,”Marryat was the daughter of Captain Frederick Marryat, a former naval officer and celebrated writer of seafaring novels. She was educated at home on her father’s Norfolk estate and in 1854 married Thomas Ross Church, an army officer. The couple settled in India where Marryat lived the leisured life of an officer’s wife in the Raj. However in 1860, the collapse of Marryat’s health (apparently the result of the Indian climate, combined with her fourth pregnancy) forced her and her children to return to England without Thomas Ross Church. Marryat turned to novel writing, bringing out Love’s Conflict in 1865. This first novel of murder and unhappy marriages was rapidly followed by two more within next twelve months: Too Good for Him and Woman Against Woman. Marryat was never again without a writing project, going on to publish novels for the next thirty-five years. To read these lurid stories of seduction, murder, insanity, extramarital sex, incest, and the exploits of the demi-monde--Woman Against Woman (1866), The Confessions of Gerald Escourt (1867), Nelly Brooke (1868), Veronique (1868), The Girls of Feversham (1869)—is to watch a novelist mining a profitable sensational seam. Although reviewers admitted Marryat’s “readableness” and the power of her “graphic, nervous, vital” and [by implication] “sensational” style, some, like George Saintsbury, pictured the typical Marryat reader as a person “of easy faith and unfastidious taste.” The Academy called her cynical and “third-rate,” too dependent for her plots on “the stock in trade of fourth-rate solicitors.” Despite this hostility Marryat’s popularity usually ensured that her sales were unaffected (or perhaps improved) by the critical disapproval.

In the 1890s, despite being increasingly plagued by ill health, Marryat’s career continued at a hectic pace. Between 1885 and 1897, she produced another forty novels, all “very unequal” as publisher William Tinsley remembered. She was active in the newly formed Society of Authors and took to breeding bulldogs and terriers. Separated from Colonel Lean, she also set up a “School of Literary Art” with the express purpose of training people for “a literary profession” and “turning talent to best account.”

In 1892 an interviewer described her as “very tall, fair and Scotch-looking . . . a little bizarre in dress, and a devout believer in all sorts and conditions of ‘spooks.’”By this time Marryat had become an advocate for spiritualism, an interest which she gave voice in The Clairvoyance of Bessie Williams (1893) and in the sensational There is No Death, a book which caused a considerable stir when it appeared in 1891 and ran to six editions in the first four years.