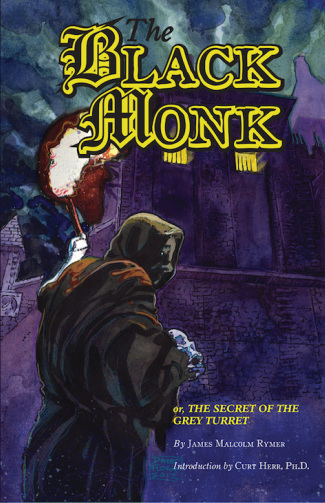 The Black Monk; or, The Secret of the Grey Turret (1844)﻿
James Malcolm Rymer
With a new introduction by Curt Herr

Brandon Castle is full of mysteries and terrors!

Lonely candles give feeble light to the eerie chill of the castle’s endless hallways. Winding staircases descend into damp crypts of discarded skeletons while rat-infested secret passages lead to satanic altars. Towering over the castle’s dank moat is the mysterious Grey Turret. Filled with legends of shadowy ghosts and terrifying demons, its only door has been locked for centuries.

Someone has discovered the key and wants the terrifying power locked away in the Grey Turret. Who dares to defy the legend of the Grey Turret? Agatha? Hungry for power, nothing can stand in her way! Eldred? Her nervous brother, the perfect foil for a murderous plan? Sir Rupert? The brave knight suffering from a heartbreaking loss? Nemoni? The mysterious wild-man of the woods? The Black Monk? Aided by Satan’s black magic, can he be stopped?

Serialized in British newspapers throughout 1844, The Black Monk is an excellent example of the Victorian penny dreadful. Each week, eager readers would await the next penny’s installment and The Black Monk delivered so many thrills and terrors that it became the mid-century’s publishing phenomenon.

This edition includes the unabridged text of the 1844 edition along with all 54 original illustrations and features a new introduction by Curt Herr, Ph.D.

James Malcolm Rymer (1814-1884) was a major contributor to Victorian literature, yet remains largely unknown today. He wrote the first vampire novel in English, Varney the Vampire; or, The Feast of Blood, and the original Sweeney Todd novel, The String of Pearls. One of the most popular penny dreadful writers of the 1840s, his serialized novels are being rediscovered as excellent examples of mid-Victorian pop culture.

Curt Herr, Ph.D. has prepared the critical editions of several Victorian Sensation novels, such as Ziska, Vendetta, Dene Hollow, and the notorious penny dreadful Varney the Vampire, or, The Feast of Blood. He teaches Gothic and Victorian Sensation fiction at Pennsylvania’s Kutztown University.

James Malcolm Rymer was born in London in 1814, the son of Malcolm Rymer, an engraver from Edinburgh, and Louisa Dixon, a milliner. In 1839, he married his first wife, Caroline Huttly, and the couple moved to Bloomsbury, where Rymer listed his occupation as “civil engineer.” Though extant records indicate Rymer was awarded at least one patent in the early 1840s for his engineering, by 1842 he had turned to literature, working as both an editor and writer, often for the unscrupulous penny dreadful publisher Edward Lloyd.

Though it is probably impossible to state the precise number of penny dreadful novels authored by Rymer, since they were often published anonymously or under a pseudonym (sometimes an anagram of his name, such as “Errym” or “Merry”), they may have numbered one hundred or more. Several of these, including Ada, the Betrayed (1843) and The Black Monk; or, The Secret of the Grey Turret (1843-44) were tremendously successful, but his most important contributions to popular culture came with The String of Pearls (1846-47), which introduced the character of Sweeney Todd, the murderous barber of Fleet Street, and Varney the Vampire; or, The Feast of Blood (1845-47), the first full-length vampire novel in English.

After working tirelessly between about 1842 and 1869, sometimes penning a dozen or more serial novels at the same time, Rymer retired from writing. He suffered from ill health in his later years and after long bouts with various illnesses died in 1884 with an estate valued at nearly £8,000, a very substantial sum for the time.