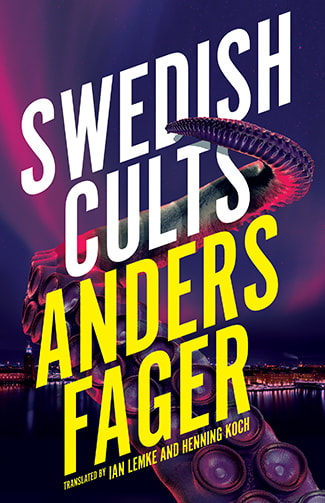 Forget everything you think you know about Sweden. In Anders Fager’s stories, Sweden is revealed as a place where dark and unimaginable things happen. Where deep in the woods bloody sacrifices are made to ancient and monstrous deities. Where two young people’s road trip to visit their grandmother takes a turn for the bizarre and nightmarish. Where a woman’s comfortable middle-class life is suddenly upended when her boyfriend develops a mysterious illness that leaves him with a constant erection and speaking in strange tongues. Where an avant garde artist discovers the veil that separates Stockholm from the shadowy city of Carcosa.

First published in Sweden in 2009, Swedish Cults has become an underground horror phenomenon in its native country and has also appeared in Italy and France, where its publisher described it as ‘Swedish Lovecraft on acid’. This first-ever English edition makes this cornerstone volume of modern Scandinavian horror available at long last to a wider audience.
EARLY PRAISE

"The first English translation of the top horror writer in Sweden . . . The world Fager has created, while very much set in and influenced by his Nordic home, expertly draws on the established Lovecraftian universe, crafting an atmosphere that steadily rises to existential terror as powerful and pervasive cosmic gods dwarf, and even mock, the pitiful humans who hope to survive their wrath . . . A must-read for fans of twenty-first century Lovecraftian horror as written by Caitlín R. Kiernan or Lucy A. Snyder."
—Booklist

"Fager successfully sets the cosmic horror of Lovecraft’s Cthulhu Mythos in his native Sweden in this unsettling collection of nine stories, proving that in the hands of an imaginative author the familiar concept of monstrous gods from other dimensions is as terrifying as ever."
—Publishers Weekly

"Swedish Cults is the ultimate classic of Nordic horror, comparable to what Clive Barker’s The Books of Blood was for English readers in the 1980s."
—Marko Hautala, Shirley Jackson Award-nominated author of The Black Tongue
​
"Grandma’s going on a journey, and so will everyone who reads this volume of very strange short stories. Fager incorporates politics, war, revenge fairies, sea monsters, and porn, spanning cultures and centuries. Sometimes his world is real and relatable, and then it is suddenly strange and disorienting. A disturbing read from a writer accomplished in the art of minimalist fiction."
—Elizabeth Engstrom, author of When Darkness Loves Us and Black Ambrosia

"Horrific, infectious and provocative stories about the unreliable backside of everything where men, creatures and gods are all hurting and no one is good, but a few struggle to be. Fager’s writing will scar you forever.”
--Måns Mårlind, writer and director of The Bridge

"I loved it! I thought the stories, each of which possessed a feverish, visceral intensity, were wonderfully depraved and wildly inventive. A really powerful collection."
​--Mark Morris, author of The Wolves of London