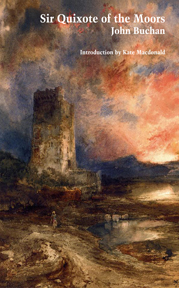 In the mid-sixteenth century, Jean de Rohaine, a middle-aged French nobleman, journeys to Scotland in search of adventure and a new beginning. In Scotland he meets up with his old friend, Quentin Kennedy, who informs him of a great battle to be waged. Yet what is the Frenchman's horror when he rides with Kennedy's men in search of honour, but finds instead that the "war" is with unarmed religious dissidents, "Covenanters," whom he watches massacred.

Disgusted, he sets off alone across the barren moors, where he wanders until he comes to a cottage containing a beautiful and unprotected young woman, Anne. Rohaine promises to be her protector, but his ideals of honour and duty will be put to the test when he finds himself gradually falling in love with her.... A powerful examination of religious fanaticism, Sir Quixote of the Moors (1895) was Buchan's first novel, published when he was a twenty year old undergraduate. With its haunting evocation of the bleak, desolate Scottish landscape and intriguing character study of its Quixote, Sir Quixote is a unique novel that differs from, yet anticipates, Buchan's later works, such as The Thirty-Nine Steps (1915).