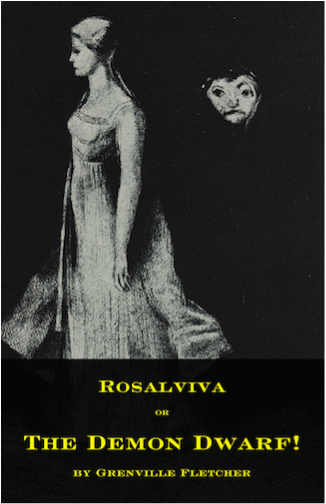 "The mysterious and singular appearance of Valfroni, joined with the immense deformity of his person, rendered him an object at once dreaded and avoided. His stature was singularly formed--misshapen, embodied with an enormous hump, and altogether so distorted and hideous, that he had sustained the general denomination of the Demon Dwarf. A large sable cloak invariably shrouded his figure; a hat, suspending a heavy plume of black feathers, partly concealed a ghastly and repulsive countenance . . . ."

On the Eve of St. Rosalia, Count Reo Cardoni is ambushed by assassins, who inflict on him a mortal wound. On his deathbed, his daughter, the beautiful young Rosalviva, swears a sacred vow to discover and punish his murderer. Immediately forgetting her oath, Rosalviva falls madly in love with her father's killer, the handsome Paoli Golfieri, whom she wishes to marry to gratify her own lust and ambition. But when Golfieri spurns her advances, she determines to seek revenge against him. And in the apparently supernatural knowledge and power of Valfroni, the mysterious and hideous Demon Dwarf, she just may have found the means to execute her murderous plans!

Originally published in three volumes in 1824, Rosalviva, or, The Demon Dwarf! has never before been reprinted, and survives in only a few copies worldwide. This new edition is newly typeset from the original edition and contains the unabridged three-volume text, along with an introductory note and a reproduction of the title page of the first edition.