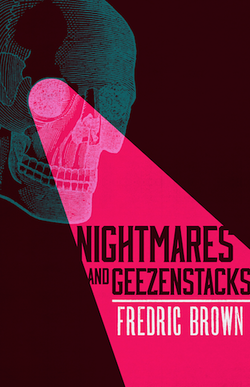 One of the great pulp writers, Fredric Brown (1906-1972) combined a flair for the horrific, a quirky sense of humor, and a wild imagination, and published many classic novels in the mystery and science fiction genres. But he was also a master of the “short-short story,” tales only a page or two in length, but hard-hitting and with a wicked twist at the end. Nightmares and Geezenstacks (1961) collects 47 short gems by Brown, ranging from science fiction to noir crime to horror, including the chilling and unforgettable “The Geezenstacks”. Long unobtainable, Brown’s classic collection returns to print for the first time in almost 40 years and is sure to please both longtime fans and those who are discovering this brilliant writer for the first time.

“Might have been written by O. Henry in a black mood; alternately comic, horrifying [and] clever.” – Science Fiction & Fantasy Book Review

“My favorite author of all time.” – Mickey Spillane

“A distinctive and unique voice . . . one of the genre's most incisive satirists and outstanding innovators.” – Library Journal

“One of the best pulp writers.” – Booklist 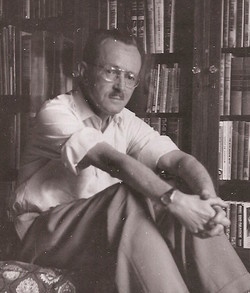 Fredric Brown was born in Cincinnati in 1906, the son of a newspaperman. Brown’s parents died while he was in high school; he graduated in 1922 and afterwards found work in an office, an experience that would provide the basis for his 1958 novel The Office. He went on to attend Hanover College and the University of Cincinnati and married his first wife Helen in 1929; they would have two sons, James and Linn. During the early 1930s, times were tough and Brown took what jobs he could get, mostly office work, but also various jobs as a dishwasher, busboy and detective. Around this time, he joined the Milwaukee Allied Authors club and started writing, primarily humorous short stories. In 1937 he took a position as proofreader for the Milwaukee Journal, a post he would hold until 1945.

Brown sold his first detective story in 1937, and by the early 1940s he was selling hundreds of stories to the detective and science fiction pulp magazines. His first novel, The Fabulous Clipjoint, was published in 1947 by Dutton after being rejected by twelve other publishers; it was a substantial success, winning the Edgar Award for best first novel. The book introduced Ed Hunter and his uncle Ambrose; the pair would feature in six further Brown novels. Several other successes followed: What Mad Universe (1949), a classic of science fiction, The Screaming Mimi (1949), which was adapted as a film starring Anita Ekberg, and Here Comes a Candle (1950), an experimental novel told in a variety of alternating media formats. Brown would continue to write prolifically throughout the 1950s, primarily in the mystery and science fiction genres.

By the early 1960s, Brown, who had never enjoyed robust health, found his health in serious decline, and his output slowed. Brown and his family had lived in Tucson, Arizona for some years at the advice of his doctors, but in 1961, he moved to Hollywood to write screenplays. However, he would return to Tucson in 1963; his last novel was published that year, and by that time he could hardly write because of illness. He died in 1972 at age 65 after suffering terribly from emphysema.
Valancourt Books | PO Box 17642, Richmond, VA 23226 | 804.873.8528 | email
Copyright © 2022 by Valancourt Books, LLC. All rights reserved. Valancourt Books® is a registered trademark of Valancourt Books, LLC.
Banner art by M.S. Corley