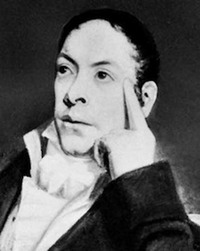 M.G. (Matthew Gregory) Lewis was born in 1775, the son of Matthew and Frances Lewis. Lewis’s father served as Chief Clerk in the War Office and Deputy-Secretary at War and owned considerable property in Jamaica, which his son would go on to inherit. Young Lewis, who hated both his given names and was known later in life as “M.G.” or “Monk” Lewis, was educated at Westminster School and Christ Church, Oxford. Intending to pursue a diplomatic career like his father, Lewis spent considerable time abroad as a young man, including extended periods in Paris and Weimar, Germany. During these travels, he began to write plays and worked on translations. In 1794, Lewis’s father helped to secure him a post at the British embassy at The Hague. Finding the Dutch capital exceedingly dull, Lewis passed his time in writing The Monk, which was published in London anonymously in the spring of 1796. The novel was immediately successful but extremely controversial, with critics objecting to the book’s sexual content and supposed blasphemy. Lewis revised The Monk for subsequent editions, toning down some of the objectionable material while adding his name and his title of M.P. to the title-page.

Though chiefly known today for The Monk, Lewis had other successes during his lifetime, including The Castle Spectre (1796), a drama; Tales of Wonder (1801), a collection of Gothic poems and ballads compiled from various sources; The Bravo of Venice (1805), a translation of a German Gothic novel; and the four-volume Romantic Tales (1808).

After the death of his father in 1812, Lewis inherited several plantations in Jamaica, the management of which took up much of his time. He died of yellow fever in 1818 on a return journey to England and was buried at sea. Lewis’s journals of his residences in Jamaica in 1815-16 and 1817 were published posthumously in 1834 as Journal of a West India Proprietor.