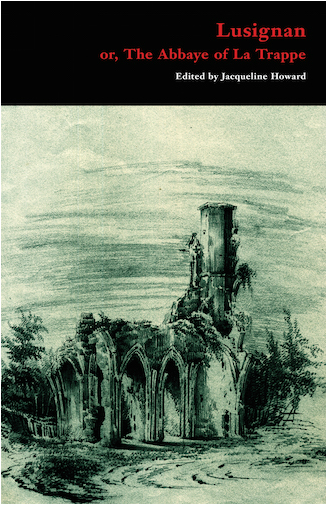 Lusignan; or, The Abbaye of La Trappe (1801)
Anonymous

Ann Radcliffe (1764-1823) was the most popular and best-selling novelist of her time, earning a widespread readership and previously unheard-of sums of money for her Gothic novels The Mysteries of Udolpho (1794) and The Italian (1797). But after publishing The Italian, at the height of her powers, she disappeared from the literary scene and never published another novel. Or did she?

Lusignan; or, The Abbaye of La Trappe, issued anonymously in 1801 by the great purveyor of Gothic fiction, the Minerva Press, is the story of the ill-fated love between the virtuous Emily de Montalte and the handsome Lusignan, and it bears remarkable similarities in theme and style to Radcliffe's works. With a quintessentially Gothic plot that features all the trappings of the genre, including a haughty aristocrat, a scheming monk, lovers immured in dungeons and convents, and a subterranean chapel haunted by a horrible spectre, Lusignanwill be of great interest to both scholars and fans of Gothic fiction alike, whether the book is in fact by Radcliffe or merely an unusually skilled imitator.

This first-ever republication of Lusignan, a novel so rare that it survives in only one known copy worldwide, includes the unabridged text of the original four-volume edition as well as a substantial new scholarly introduction and extensive annotations by Dr. Jacqueline Howard, who has previously argued in a published article that Lusignan could be the work of Radcliffe.
BOOK DETAILS
ISBN: 1941147747
ISBN-13: 9781941147740
$22.99 US, 392 pp.
Trade paper
Published 2015