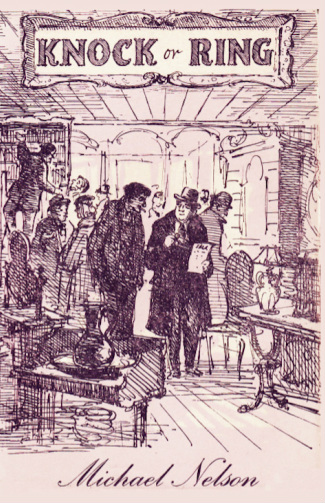 Business is slow at the provincial bookshop owned by young Michael Ransome, which suits him fine, since he'd rather be asleep or drunk than at work anyway. Unfortunately, there's the small problem of earning a living, but Ransome thinks he's found a solution. Sir Jeremy Etchingham's library is set to be auctioned off, and there is a legend that a unique and priceless bibliographical rarity is among its books, a legend which Ransome thinks he alone knows. He is determined to get his hands on this treasure through fair means or foul, but he hasn't reckoned on 'the Ring', an illegal conspiracy of powerful London book dealers, who have their own designs on the book. . . .

Knock or Ring (1957) was the first novel by Michael Nelson (1921-1990), who was more famous for his second book, the gay classic A Room in Chelsea Square (1958). A very funny and entertaining story of the unexpectedly shady world of antiquarian bookselling, Knock or Ring was well received on its initial release but has never been reprinted until now. This edition includes the original cover art by Sir John Verney and an introduction by London bookseller John Saumarez Smith.

‘A promising debut. Here is rollicking, yet far from vacuous, entertainment.’ - Birmingham Post

‘An amusing and capable first novel.’ - The Observer

‘Amusing and racy. The tricks of the trade are woven into a well-constructed plot.’ - The Star

‘A rattling good novel . . . pleasant hours in the company of men who love books, angling and wine - what better ingredients can one ask from a novel?’ - The Publisher 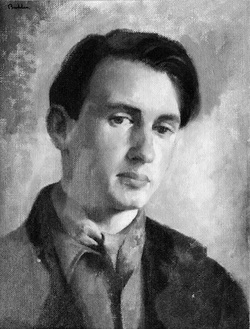 Michael Nelson (known as ‘Mickey’) was born in 1921. He worked as a journalist before the Second World War, and during the war worked as secretary to John Lehmann, a prominent publisher and man of letters, and served as a captain in the Royal Army Service Corps. After his demobilisation, he lived with his boyfriend in Winchester and owned a bookstore there before meeting Rachel Holland, who knew Nelson was gay but married him anyway; the two remained married the rest of their lives. Nelson and his wife relocated to London, where he was well known in the drinking establishments of Soho. Nelson’s first novel, Knock or Ring (1957), which concerned the illegal practices of the ‘ring’, a group of booksellers who conspired to fix auctions and share profits among themselves, drew on Nelson’s own experiences as a bookseller and received good reviews. His second book, A Room in Chelsea Square (1958), also available from Valancourt Books, was published anonymously, and has gone on to become a gay classic. His other books are Blanket (1959) (published under the pseudonym ‘Henry Stratton’), When the Bed Broke (1961),  Captain Blossom (1973), Captain Blossom Soldiers On  (1974), Nobs & Snobs (1976), Captain Blossom in Civvy Street (1978), and Fear No More (1989). Michael Nelson died in 1990.
Copyright © 2021 | PO Box 17642, Richmond, VA 23226 | 804.873.8528 | email
Banner art by M.S. Corley