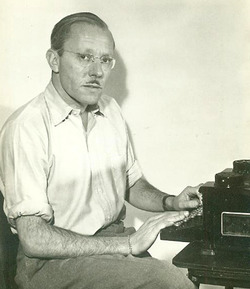 James Ramsey Ullman was born in New York in 1907. After his graduation from Princeton in 1929, he worked as a reporter for a Brooklyn newspaper and then turned to the theater, first as a playwright, and from 1933 to 1939 as producer or co-producer of a dozen Broadway plays. Beginning in 1939, aside from a stint with the American Field Service in Africa during World War II, Ullman was “a full-time writer—and roughly half-time traveler.”

Two trips to the Amazon jungle resulted in the writing and publication of The Other Side of the Mountain (1938), and the later novel, River of the Sun (1951), a Book-of-the-Month Club choice. Windom’s Way, a Literary Guild selection in 1952, is the story of an American doctor in Southeast Asia, and The Sands of Karakorum (1953) tells of a missionary’s disappearance in the interior of Communist China. Four of Ullman’s books were adapted as major motion pictures.

Travel, and particularly mountaineering, provided the physical background and spiritual core of most of Ullman’s books. He climbed in the Rockies, the Andes, the Alps, the Himalayas, and in Africa, where he reached the top of Kilimanjaro. Two of his novels, The White Tower (1945) and Banner in the Sky (1954), a novel for young readers, are set in the Alps, and Tiger of the Snows (1955) took him to India and Nepal to work with Tenzing Norgay, the Sherpa who, with Sir Edmund Hillary, made the first ascent of Mount Everest.

In 1957, Ullman traveled in Europe and Africa, retracing the steps of Arthur Rimbaud and gathering material for his great biographical novel, The Day on Fire (1958), which took him eighteen months to write.