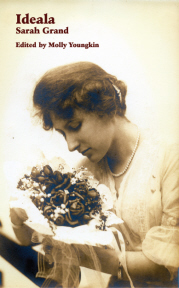 One of the earliest "New Woman" novels, Ideala (1888) tells the story of a woman who, after making a bad marriage, must decide whether to leave her husband for another man or embrace a feminist philosophy that requires her to sacrifice personal relationships for the good of other women. Told in first-person, by Ideala's friend Lord Dawne, the novel details Ideala's journey to understanding herself and her place in nineteenth-century society. Along the way, we see her writing poetry, providing charity to the poor, falling in love, and travelling to China, all as means to figure out how to live her life in a meaningful way.

Author Sarah Grand, best known for The Heavenly Twins (1893), published Ideala with her own money after leaving her unhappy marriage and coming to London to establish herself as a professional writer in the early 1880s. In Ideala, Grand lays out the foundations for the New Woman of the 1890s by showing how one woman processes the legal and economic restrictions women in unhappy marriages faced in the nineteenth century and thinks through how to remedy her own situation.

This edition includes an introduction that examines the biographical and historical contexts that influenced Grand's writing, explanatory notes, and an appendix of contemporary reviews of the novel.

"For those who have been reading Ideala on microfiche or in crumbling antique editions, Molly Youngkin's new scholarly edition will be a tremendous boon. Given the dearth of in-print editions of New Woman novels by women, Valancourt's Ideala will offer a welcome alternative to those old stand-bys, Gissing's The Odd Women and Hardy's Jude the Obscure." - Anna Jones, University of Central Florida