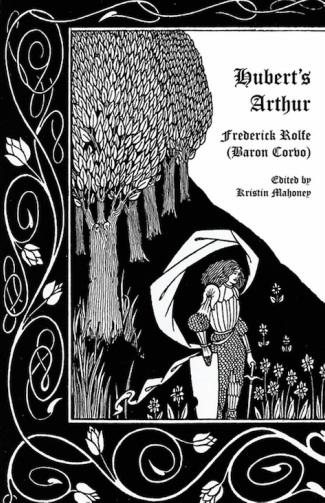 Taking as its point of departure the alleged inaccuracy of the chronicles of Matthew Paris, Hubert's Arthur presents an alternative retelling of English history from the point of view of Hubert de Burgh. In Hubert's narrative, which begins with an account of the struggle for succession in the wake of King Richard Lionheart's death, young Duke Arthur of Brittany does not die at the hands of King John, but instead ascends to the throne. Hubert relates Arthur's adventures as he combats the wily John, fights in the Crusades, and wages battle against the treacherous Simon de Montfort, before facing perhaps his greatest challenge when his reign is threatened by the crucifixions of young Christian boys.

Penned by the brilliant but eccentric Frederick Rolfe (who styled himself Baron Corvo) whilst he was starving and homeless in a self-imposed exile in Venice, Hubert's Arthur, first published posthumously in 1935, is one of the strangest and most remarkable novels of the twentieth century. Filled with action and suffused throughout with Rolfe's characteristic humor, the novel is notable for its blatant homoeroticism, its savage anti-Semitism, and its shockingly graphic violence. This edition features a new scholarly introduction by Kristin Mahoney, who also provides detailed annotations to help guide readers through Rolfe's labyrinth of historical and literary references and his unique vocabulary of archaic words, some of which have not been used since the sixteenth century.

"Mahoney's introduction to Hubert's Arthur is excellent advocacy for the virtues and importance of the work. With notes in the text up to this standard, the edition will not only contribute importantly to scholarship on Rolfe, but also help forge new understanding of the values of his age." - Prof. Edmund Miller, Long Island University