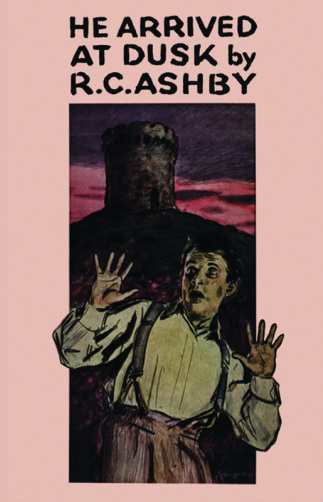 ﻿He Arrived at Dusk (1933)﻿
R.C. Ashby (Ruby Ferguson)
With a new introduction by Mark Valentine

From the moment William Mertoun arrives to catalogue the library at Colonel Barr’s old mansion on the desolate Northumbrian moors, he senses something is terribly wrong. Barr’s brother Ian has just died, mysteriously and violently, and the Colonel himself is hidden away in a locked room, to which his sinister nurse denies all access. As strange and supernatural events begin to unfold, Mertoun learns the local legend of a ghostly Roman centurion, slain on the site sixteen centuries earlier, who is said to haunt the estate. Mertoun is sceptical at first, but after another murder, a harrowing séance, and an actual sighting of the spectre one lonely night on the moor, he realizes that he and everyone at Barr’s mansion are in mortal danger. What does the ghost want, and can it be stopped? This long-awaited new edition of He Arrived at Dusk (1933), R. C. Ashby’s classic tale of mystery and the supernatural, features a new introduction by Mark Valentine and a reproduction of the original jacket art.

“In reading it I had several splendid shudders. . . . It is a piece of living literature, not merely an evening’s entertainment.” - E.B. Osborn, Morning Post

“A bang-up ghost-murder-detective story with a background of bleak Northumberland moors, an old house full of haunts, [and] a Roman Centurion who appears . . . with death in his wake.” - Scribner’s Magazine

“Truly a little masterpiece of a book. Reminiscent of Christie at the height of her powers in its brilliant use of misdirection. . . . Really a classic of its kind.” - J. F. Norris, Mystery File

R. C. (Ruby Constance) Ashby (later Ruby Ferguson) was born in Yorkshire in 1899. She was educated at the Girls’ Grammar School, Bradford, and matriculated at St Hilda’s, Oxford in 1919, from which she graduated in 1922 with a degree in English Literature.

Before she began her literary career, Ashby worked in a variety of jobs, including secretary, teacher, journalist, book reviewer, and publisher’s reader. Her first novel was published in 1926 and she went on to write a total of eight novels under the name R. C. Ashby between 1926 and 1934, the best-known of which are He Arrived at Dusk (1933) and Out Went the Taper (1934). All of these books are quite scarce today.

After her marriage to Samuel Ferguson in 1934, she published exclusively under her married name, and her works underwent a complete change of style. Her next book, Lady Rose and Mrs. Memmary (1937), a romantic novel, was popular and well-received and was said to be a favourite of the Queen Mother. She continued to publish a number of romantic novels but was best known for her series of “Jill” books for children, which have remained almost continuously in print since the first “Jill” book appeared in 1949.

Later in life, Ferguson and her husband moved to Jersey, where she died in 1966.