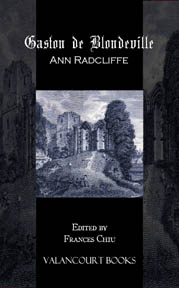 "A scholarly edition with a selection of contemporary reviews and extracts from various key reformist players, Gaston de Blondeville supports the recent opinion that Radcliffe’s narrative politics are more radical than has previously been considered.... [Frances Chiu] effectively contextualizes the novel’s theme of ‘wronged innocence’ in the light of the post-revolutionary politics of the 1790s"  -- Times Literary Supplement, June 1, 2007

King Henry III is holding court at Kenilworth.  Festivities abound, wine flows copiously, and spirits are high as the King and his subjects prepare to celebrate the nuptials of Sir Gaston de Blondeville.  But the joyous mood is interrupted when a merchant, Hugh Woodreeve, comes distraught before the King to demand justice.  His kinsman, he claims, was murdered, by the very man the King has come to honour -- Gaston de Blondeville!

Suspecting a conspiracy against Gaston, yet obliged to hold a trial to determine the truth of the allegations, Henry imprisons Woodreeve in a tower while awaiting a hearing.  Meanwhile, sinister forces are at work, represented by an evil abbot, who will stop at nothing to ensure the truth behind Woodreeve's claims is never revealed.

As the trial unfolds and the danger mounts for both Woodreeve and Gaston, a mysterious figure will come from beyond the grave to elucidate the horrible mystery!

The only one of Radcliffe's novels to feature a real ghost, Gaston de Blondeville was published posthumously in 1826.  This edition, the first-ever scholarly edition of the novel, features a new introduction by Frances Chiu, uncoding the novel's long-hidden political, historical, and religious contexts.  A wealth of supplementary materials, including excerpts from other primary texts and the complete text of contemporary reviews, is also provided to enhance modern readers' understanding of the novel's themes.