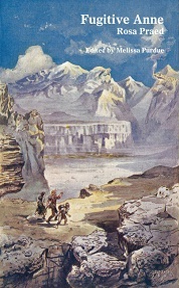 Anne Bedo is unhappily married. Her husband, Elias, is an abusive drunk who cruelly mistreats her, and she decides she can't take it any more. While traveling by ship, Anne decides to make her escape. Making it appear as though she has gone mad and thrown herself overboard, she instead disembarks in disguise with her friend, the Aboriginal youth Kombo.

Anne and Kombo venture through dangerous, unexplored country, braving the murderous tribes and cannibals, as she seeks to put distance between herself and her persecutor. During her travels, she meets up with Danish explorer Eric Hansen, and together, they make an astonishing discovery. Deep in the Australian wilderness lives a tribe of "Red Men," the Aca, part of the ancient Mayan race. Can Anne, Eric, and Kombo survive the myriad threats posed by savage cannibals, the Aca's "Death-Stone," and the vengeance of Elias Bedo?

A "lost race" adventure novel in the tradition of H. Rider Haggard, Rosa Praed's Fugitive Anne (1902) also confronts important issues of the day, including colonialism and the difficulties faced by women trapped in bad marriages. This edition, the first in over a century, includes the complete text of the first edition, a new introduction and notes by Melissa Purdue, an appendix containing contemporary reviews and an interview with Rosa Praed, and five illustrations from the 1904 American edition of the novel.