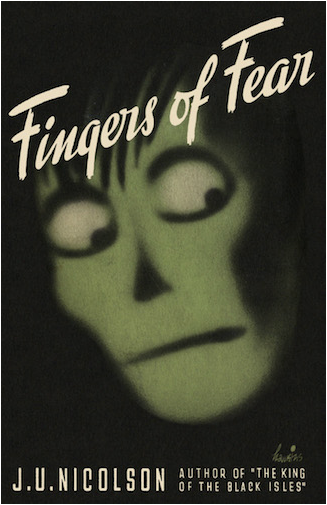 Utterly ruined by the stock market crash of 1929, Selden Seaforth has lost his money, his job, and his wife. When an old school friend, Ormond Ormes, offers Seaforth a job cataloguing the library at the mansion of Ormesby in the Berkshires, it seems as though things may finally be turning around. But almost as soon as he arrives at Ormesby, it is clear that something is terribly wrong. Ghosts stalk the corridors, and Seaforth awakens to find a mark made by a human mouth on his neck. Is there a vampire, a werewolf, or something even worse, at Ormesby? Seaforth must try to piece together the secrets of the strange Ormes family, but things take a still more sinister turn when the first brutally murdered corpse is found . . .


The only novel by J. U. Nicolson (1885-1944), Fingers of Fear (1937) was hailed by Karl Edward Wagner as one of the finest supernatural horror novels ever written, and it is perhaps unrivaled in its ability to evoke a weird and uncanny atmosphere of eerie dread. This edition features a reproduction of the original dust jacket art.

“Piles horror upon horror until there is not a shiver left in the reader’s spine.” – New York Times

“A blood curdler, with ghosts and werewolves disporting themselves in a house in the Berkshires. Insanity, murder, as bloody as they come.” – Kirkus Reviews

“A most impressive offering of the vampire school … an unusual combination of perilous material, real excitement, and good English. What more can you ask?” – Books

John Urban Nicolson was born in Alma, Kansas in 1885. He published several volumes of poetry, including King of the Black Isles (1924), The Sainted Courtezan (1924) and The Drums of Yle (1925), as well as translations of Chaucer’s Canterbury Tales and the works of François Villon. His only novel, Fingers of Fear, was published in 1937 to positive reviews and is remembered today as one of the works included on Karl Edward Wagner’s list of the top supernatural horror novels of all time. Nicolson died of coronary thrombosis in Mason, New Hampshire in 1944; his death certificate indicates that he was married to Ida Nicolson and that at the time of his death at age 59, he was working as manager of a storage warehouse.