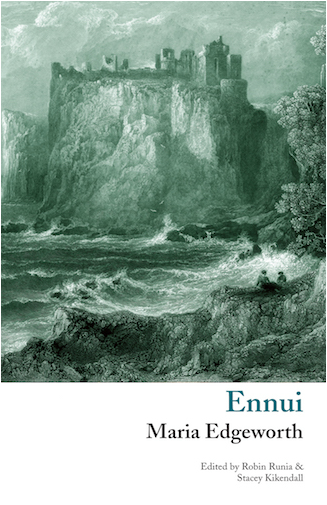 “Whilst yet a boy I began to feel the dreadful symptoms of that mental malady, which baffles the skill of medicine, and for which wealth can purchase only temporary alleviation. For this complaint there is no precise English name—but, alas! the foreign term is now naturalized in England.—Among the higher classes, whether in the wealthy, or the fashionable world, who is unacquainted with ennui?”

At a young age, the Earl of Glenthorn inherits a title, a large fortune, and estates in England and Ireland. But his enormous wealth provides no relief from his ennui, a state of total apathy and indolence from which travel, extravagant expenditures, and gambling fail to rouse him.

But when he decides to visit Glenthorn Castle in Ireland, the young nobleman will finally be shaken from his ennui—by his love for a beautiful woman, his entanglement in the violent Irish Rebellion of 1798, and a shattering secret he will discover about his own past that will profoundly change his life forever.

An important early Irish writer and a pioneer of early 19th century European fiction, Maria Edgeworth (1768-1849) was prolific and highly regarded in her own time, but is somewhat neglected today. One of her finest works, Ennui (1809), both an engaging Gothic tale and a satire on the foibles of the wealthy, appears here in a new scholarly edition, which includes an introduction and notes by Robin Runia and Stacey Kikendall, as well as the text of a second classic Edgeworth novella, The Dun.