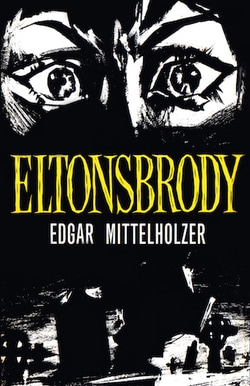 ﻿Eltonsbrody (1960)﻿
Edgar Mittelholzer
With a new introduction by John Thieme

When Woodsley, a young English painter, arrives in Barbados and finds no lodging available, he thinks himself fortunate to be invited to stay at Eltonsbrody, a mansion belonging to the eccentric widow Mrs Scaife. But behind the locked doors of the house’s disused rooms lurk terrible secrets, and soon strange and blood-curdling events begin to unfold. The tension builds towards a shocking and unforgettable conclusion, when the full horror of Eltonsbrody will be revealed.
​
One of the most prolific and important of 20th-century Caribbean writers, Edgar Mittelholzer (1909-1965) was at his best in Gothic novels like My Bones and My Flute (1955) and Eltonsbrody (1960). This first-ever reissue of Mittelholzer’s weird and chilling tale reproduces the original dust jacket art and includes a new introduction by John Thieme.

‘One of the modern giants of Caribbean writing.’ - Caribbean Writers

‘A sanguinary essay in the macabre.’ - The Crisis
​
‘An original writer with a great command of language and atmosphere . . . true imaginative power.’ - John O’London’s Weekly

Edgar Mittelholzer (1909-1965) is often considered to be the first novelist from the West Indies to earn an international reputation for his fiction, as well as the first professional novelist to emerge from the English-speaking Caribbean. Beginning with his first book, Creole Chips, which he self-published in 1937, Mittelholzer would go on to publish more than twenty volumes of fiction, as well as two volumes of nonfiction, including the autobiography A Swarthy Boy (1963). His best-known works include A Morning at the Office (1950), which one critic cited as having begun ‘the great decade of the West Indian novel’, the Kaywana trilogy (1952-58), and the ghost story My Bones and My Flute (1955).