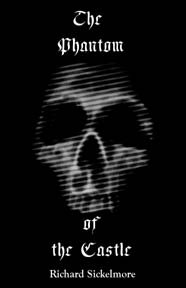 Edgar; or, The Phantom of the Castle (1798)
Richard Sickelmore

"His face struck against something, he stumbled, and had nearly fallen; he stooped to examine what it was, and his hand rested on the face of a human being, cold, putrid, and clammy!"

Young Edgar's father, the noble Baron Fitz-Elmar, has been mysteriously slain, and his uncle, the scheming Armine, rules in his place.  Determined to retain his power, Armine will stop at nothing to destroy Edgar, who stands to inherit the castle.

Now Edgar must flee his tyrannical uncle and outrun the murderous army of assassins sent to kill him.  His flight will lead him, on a dark and stormy night, to a ruined priory, where he will discover the horrible truth behind his father's untimely end.

A gothicized retelling of Hamlet, and heavily influenced by the tragedies of Shakespeare and the Gothic romances of Walpole and Radcliffe, Edgar; or, The Phantom of the Castle was the first of Richard Sickelmore's Gothic novels.  This edition, the first since its initial publication in 1798, includes a new introduction, notes, and the complete text of contemporary reviews.