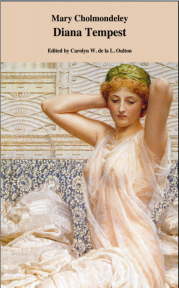 " 'Diana Tempest' is a book to be read. It is more--it is a book to be kept and read again, for its characters will not pass into limbo with this year's fashions. It will stand in the front ranks of fiction for some time to come." -- St. James's Gazette

When Mr. Tempest dies, the family fortune and estate pass to his son, John, whom everyone except John himself knows to be illegitimate. Colonel Tempest, his spendthrift son Archie, and his beautiful daughter Diana find themselves cut off, and Colonel Tempest is bitterly resentful.

One night, in a drunken stupor, he agrees to a bet, by which he will pay £10,000 if he should ever succeed to the Tempest estate. By the time he realizes that the effect of this wager was to place a bounty on John's head, it is too late -- and attempts begin to be made on John's life! Meanwhile, Diana, strong and independent, has declared that she will never marry . . . but as she becomes closer with her cousin, her sentiments start to waver. And when John learns of his own illegitimacy, what will happen to his burgeoning relationship with Diana and his claim to the Tempest fortune?