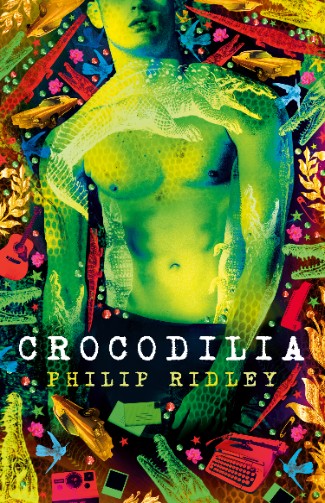 When eighteen-year-old Dominic meets his new neighbour, the sexy, green-haired, tattooed punk Billy Crow, it’s lust at first sight. And judging from their smouldering first encounter, Billy seems to feel the same way. But when Billy mentions a previous lover, Dominic demands to know all about him. And so a story starts to be told. A strange, fantastic story that begins to obsess Dominic more and more, until he finds himself wondering where that story ends . . . and his story begins.

Set in London’s East End in 1982, Philip Ridley’s novel is a masterwork of gay fiction with a glittering, labyrinthine narrative and a firework display of images – a house full of crocodiles, Elvis Presley in a gold Cadillac, a cinema bathed in green neon – not to mention sex scenes of such dizzying eroticism that they take the breath away.

In the years since its first publication in 1988, Crocodilia has become a cult classic, and for this new edition the author has expanded and developed the novel further, presenting it now – for the first time – as it was always intended. Already known as a visionary film director and one of the most original playwrights of his generation, with this new release Ridley confirms his place as one of our most innovative, distinctive, and dazzling novelists.

'Startling . . . a beautifully conceived flight of the imagination.' – Time Out

‘Ridley is a visionary.’ - Rolling Stone