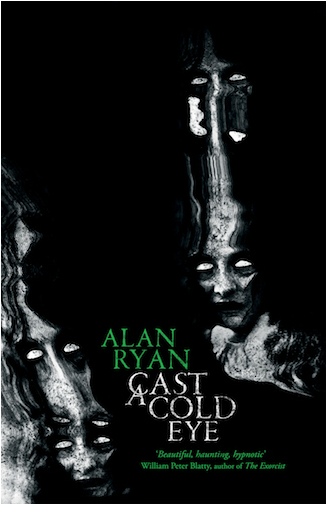 Jack Quinlan, an American writer, travels to a small village in the remote western part of Ireland to research a book on the Irish Famine. The quiet, picturesque village seems just the place to spend a few months writing, but beneath its placid exterior lurk dark secrets. Why do the locals behave so strangely? What is Father Henning, the enigmatic parish priest, hiding? And what is the meaning of the strange ritual Jack observes in the cemetery? The search for answers will lead him to the terrifying discovery that the ghosts of the past linger on in the present, and they cry out for blood ...

An atmospheric, haunting ghost story, Cast a Cold Eye (1984) is a slow burn horror novel that will keep readers in suspense until its chilling conclusion. ​

“Alan Ryan is one of the brightest lights among the new generation of horror writers.” – Peter Straub, author of Ghost Story

“The writing is beautiful, haunting, hypnotic ... The ghosts of Cast a Cold Eye have not left me.” – William Peter Blatty, author of The Exorcist

“[Ryan] is in the front ranks of today's horror writers.” – Karl Edward Wagner, in Twilight Zone

Alan Ryan was born in The Bronx in 1943 and lived most of his life in New York City before moving to Brazil in 2001. He graduated from Regis High School in Manhattan and from Fordham University in The Bronx. Ryan taught English at Cardinal Spellman High School in The Bronx before turning to writing full time in the 1970s, first as a literary critic and book reviewer and later as an editor and author of fiction. In the early 1980s, Ryan was hailed as one of the bright new lights in the horror field, with several successful novels, including The Kill, Dead White, and Cast a Cold Eye. He also earned critical acclaim for his short fiction, which was collected in the volumes Quadriphobia and The Bones Wizard. Ryan also edited a number of important horror anthologies, including Halloween Horrors (1986) and Vampires (1987) (republished as The Penguin Book of Vampire Stories). After a long absence from the genre, Ryan returned with a new novel, Amazonas, and a new collection of short fiction, The Back of Beyond, both of which were published posthumously by Cemetery Dance. Ryan died in Rio de Janeiro in 2011.
Copyright © 2021 | PO Box 17642, Richmond, VA 23226 | 804.873.8528 | email
Banner art by M.S. Corley