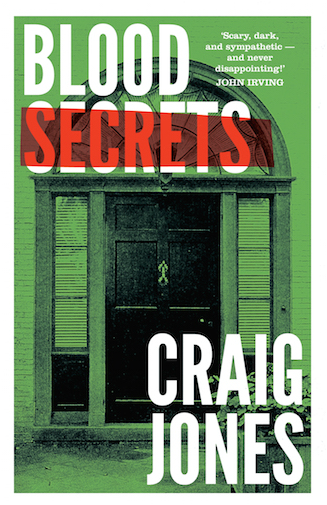 
When Irene Rutledge, a brilliant and beautiful young graduate student, meets the mysterious and fascinating Frank Mattison, the two soon fall in love and marry, despite the warnings of Irene’s family and friends. But after their marriage, dark secrets from Frank’s past emerge to threaten their happiness, secrets that will lead to murder—and a shocking and horrific conclusion . . .

Craig Jones’s critically acclaimed first novel, the Edgar Award-nominated Blood Secrets (1978), was a bestseller when originally published and has since been acknowledged by many critics as a masterpiece of modern Gothic fiction. This edition features a new preface by the author.

“The first Harper ‘Find’ book in almost 20 years, chosen as such by unanimous vote of the sales force, this builds, deceptively slow at first, then with mounting and mounting tension, to a truly horrendous and yet dazzling climax. Jones . . . shows us how a college romance can turn into a marriage and then a nightmare. She is smart, acerbic, witty. He is reclusive, intelligent, hard to get . . . All the while, sometimes behind the scenes, sometimes right up there in the fore­front, are tantalizing bits of informa­tion about the kind of childhood both parents had. The operative word here is, indeed, ‘secrets.’ The wife sees things one way, the husband another . . . About three-quarters of the way through you will begin to think you have arrived at the most frightening ‘secret’ of all. There is more in store for you, however, and it won’t help solve the ultimate puzzle even though you know from the first sen­tence in the book that the narrator is on trial for murder. The psychologi­cal insight here is convincing, the denouement devastating.” — Barbara Bannon, Publishers Weekly

“Craig Jones is a deft storyteller, ruthless at withholding information and absolutely, instinctually right about the precise moment to release information. You read this novel to find out what happens next; what happens is scary, comic, dark and sympathetic—and never disappointing.” —John Irving, author of The World According to Garp

“A book strongly reminiscent of Ira Levin’s Rosemary’s Baby, though it does not deal with witches, merely strange people . . . a novel which starts out as a love story soon becomes a nightmare for those closely involved.” --West Coast Review of Books

“There’s not a dull moment in this raw and shocking tale of evil family ties by a psychologically perceptive writer who knows how to build up to a searing, multi-twist ending the way a tornado gathers momentum. It’s undiluted horror.” --Mademoiselle


“Blood Secrets is primarily a suspense story . . . but it is also a sort of domestic tragedy about two convincing, often likeable people in conflict over their child. The combination makes for a book that is hard to put down.” —Atlantic Monthly

Craig Jones was born in California and grew up in Michigan. He earned a B.A. in English from Michigan State University and an M.A. in Drama & Cinema from New York University. He has taught high school English (in Brooklyn), worked as a copywriter for Barnes & Noble’s Catalogue, written book reviews for a Connecticut newspaper, and served as a caregiver for two longtime friends. He lived in New York City for twenty-three years, in rural Connecticut for ten, and now resides in his home state. His other two novels are Fatal Attraction (not the basis for the film) and Too Late To Be Good. He is currently completing a new work.