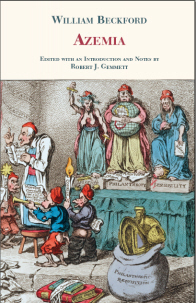 Azemia is a satirical attack on what William Beckford perceived as characteristically feminine novel-writing. First published in 1797, under the pseudonym Jacquetta Agneta Mariana Jenks, it joined its companion volume Modern Novel Writing, or, The Elegant Enthusiast (1796) in ridiculing the sentimental and sensational novels of the day, and especially the productions of William Lane's Minerva Press. However, it is also a biting political satire, attacking the Tory party and its leader, William Pitt the Younger, for the war with France, repressive legislation, and neglect of the poor.

This is the first-ever scholarly edition of the novel and includes a new introduction by Robert J. Gemmett, as well as thorough annotations, a bibliography, and contemporary illustrations.

William Beckford (1760-1844) was a novelist, travel writer, art critic, and collector. One of the most controversial figures of his time, as well reputedly the richest man in England, he is probably best remembered as the author of the Gothic novel Vathek (1786) and the creator of Fonthill Abbey.

Robert J. Gemmett, Professor of English at the State University of New York, Brockport, is an acknowledged expert on William Beckford and is the author of numerous books and articles on his life and works. He is also editor of the first scholarly edition of Modern Novel Writing, published in 2008.