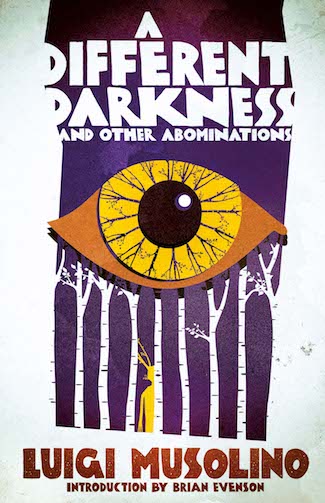 This brilliant new collection showcases the best short stories and novellas of one of Italy's leading horror writers, now available in English for the first time. In 'Lactic Acid', a runner out for a jog through the countryside decides to take a shortcut that leads him straight into a nightmare. In 'Uironda', a jaded truck driver hears an eerie legend of a mysterious highway exit that leads to another dimension, but the reality of the horror he finds there is beyond his wildest imagination. In 'The Stag', a journalist covering a traditional festival in a small town finds himself lost in the woods with a monstrous and terrible deity. And in the title novella, after a girl vanishes from a supermarket without a trace, her grieving parents begin to find solace when they discover a bottomless hole in their basement from which the little girl's voice seems to be coming. But the shimmering allure of that different darkness is not all it seems ...

As Brian Evenson writes in his introduction, "Musolino has a strong and original voice and uses it to get to some uniquely dark places. Rather than blood or gore, he’s ultimately interested in what’s truly terrifying: the vertiginous darkness that threatens to open up and swallow us. A darkness that calls to us, calls to us, until we can’t help but answer and stumble toward it." Set among the plains and mountains of Musolino's native Piedmont and drawing on Italian folkloric traditions, these tales may have an Italian flavor to them, but the strangeness and horror they explore are universal.
EARLY PRAISE
‘Luigi Musolino enters the territories of superstition and folklore knowing that fairy tales are always terrible and legends hide unspeakable  truths. Small towns, supermarkets, apartments, schools or farms: when horror touches reality, it becomes the only thing that exists. These stories have a distinctly European feel: there’s a sense of old but not quite forgotten rituals, a touch of Pan and the deities that still linger behind the haunted fields and forests.’
– Mariana Enríquez, author of Things We Lost in the Fire and Our Share of Night

‘The pleasure of these stories lies in the writing itself, in Musolino’s deft ability to find horror where we least expect. He embraces strangeness, and does so through an agile narrative style that keeps us on our toes ... Musolino has a strong and original voice, and uses it to get to some uniquely dark places. Rather than blood or gore, he’s ultimately interested in what’s truly terrifying: the vertiginous darkness that threatens to open up and swallow us.’
– Brian Evenson, award-winning author of Song for the Unraveling of the World

‘Musolino will catch you in the meshes of his nightmarish landscapes and paranoid scenarios, his engrossing stories and powerful endings. He's the real thing.’
– Michael Cisco, author of The Divinity Student

‘An experience worthy of David Cronenberg, a sick and monstrous universe where authors like Barker and Ligotti would feel right at home.’
– Nicola Lombardi, author of The Gypsy Spiders