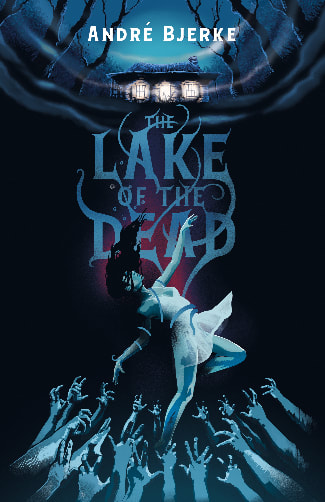 ﻿The Lake of the Dead
André Bjerke
Translated from the Norwegian

We got up and began to assemble in the large, deep leather armchairs by the fire. I built up a splendid bonfire of pine logs, dimmed the lights, and settled into the largest and deepest chair. Sonja disappeared for a while, and when she came back you could hear the cozy sound of the coffee simmering in the kitchen.

‘Don’t get your hopes up too much,’ Gran said with a smile. ‘Strictly speaking, what I have to tell isn’t really a story, only the outline of one. You’ll have to expand on it yourself.’

‘All right. I thought of this when you used the phrase “the specter of a death by starvation”.’

‘But that’s all been done to death long ago. The classic in the genre is Sverre Vegenor’s landmark work, “The Yellow Phantom”, which appeared in Detective Magazine, number 14.’

‘Very possible. But I still think this one is a little out of the ordinary. It’s really Werner who should be telling it, but I have more of a knack for storytelling, so it’s better if I do it. So, then. Two weeks ago, our friend Werner bought an old cabin up in Østerdal, close to a little body of water called Blue Lake. It’s one of the gloomiest and most god­­forsaken parts of the country, mile after mile of dense, black forest; the nearest inhabited spot is a little village, a hamlet about two hours from the cabin. Besides that, you might happen upon the occasional logger wandering around up there in the wilderness; there’s a small river nearby, used during part of the summer to float logs down. The cabin has been empty for the past generation; it’s over a hundred years old, and in recent years it’s been badly run-down, but Werner has had some people there to fix it up, patch the roof and walls and so on, enough to keep even the most aggressive forces of nature out. Every child in those parts knows that cabin; it’s been talked about as far back as anyone can remember. A legend has formed about it, and it’s become a sort of Sleeping Beauty’s castle in the local imagination. They call it “Dead Man’s Cabin”.’

‘This sounds good,’ I murmured. ‘A great prelude. Keep going.’

‘About a hundred years ago there lived a rich man down in the village, a man by the name of Tore Gruvik. He built that house up in the woods and used it mostly as a hunting lodge; every autumn he would stay up there alone. The villagers describe Tore Gruvik as a coarse and ruthless person, a man without conscience or scruples. He’s supposed to have been brutal towards those who owed him money, and in fact towards all the little people he had in his power. They say he was built like a giant, with a wild and terrifying appearance, something between a highwayman and a pirate from Captain Morgan’s day. Though maybe we shouldn’t focus too much on such features; it’s the sort of picture often painted by a person’s enemies. Maybe he just had a strong and imposing personality. But in any event, the fact is that he was hated by almost everyone who knew him. They say there was only one person Tore Gruvik could tolerate having around him: his sister. Or rather, he didn’t just tolerate her – he worshipped her with an almost unhealthy affection. They had lived together since their parents’ death, and it looked as if the sister would never marry, even though she was almost thirty; many people thought her brother wouldn’t allow it.’

‘You’re being too long-winded,’ Werner interrupted. ‘Do you have to go into so much detail? Why not get straight to the point? Besides, several of us have already heard this tall tale before.’

‘This isn’t an ordinary story you’d find in a magazine, or a news item about a train accident,’ Gran insisted. ‘This is a novel, an ancient tragedy, and so the presentation requires details. Anyway, Bernhard needs them for his book.’

‘Of course,’ I said. ‘Please don’t interrupt the storyteller. Go on, Gran; you’re under my personal protection.’

‘One day a new farmhand turned up on Gruvik’s farm. The story doesn’t tell us his name, but he must have been a typical rural Casanova, a skirt-chaser who had a way with the ladies, and at the same time the kind of guy who might remind you of one of Hamsun’s vagabonds. He went from farm to farm around the country taking on work. Everywhere he went, he got the girls inside the barn with him as quickly as possible; once the barn door had closed behind them, there was no resisting him. And then there was nothing left to do but go on to the next farm and repeat the experiment there. Abortion wasn’t so common back then, so he left a long trail of bastards in his wake, clearly marking for posterity the path he’d taken across the countryside.

‘Enough about that. So one day he arrived at Gruvik’s farm, and Tore’s sister fell for him right away; she didn’t have much experience with men, and in her first encounter with the forces of nature she was immediately swept off her feet. But he must have been unusually interested in her as well; contrary to his habit, he suggested that she elope with him. She couldn’t refuse him; one night they ran off into the woods together and were gone. Gruvik found out a few hours later and was livid with rage, rather understand­ably; people had a sense of family honor in the old days, and that sister was his most precious possession. He took down his biggest and mightiest ax, sharpened it for a whole hour in the woodshed, and then set out after the fugitives.’

Gran paused for effect and lit another cigarette. The silence was broken only by the crackling sparks from the pine logs. I could see from the faces around me that the audience was starting to get caught up in the story. Even Mørk and Bugge evidently couldn’t contain their interest.

‘I can’t believe you haven’t told me this story before, Liljan,’ said Sonja, almost reproachfully. ‘I can’t wait to see how it turns out. I kind of think I’m rooting for the two who ran off.’

‘The two lovers made an unpardonable error,’ Gran continued. ‘They didn’t count on Tore discovering their flight and coming after them that same night, and so they chose to spend the night at Gruvik’s own cabin up in the woods. You might say that was a pretty stupid thing to do, but peasants live more in the moment than we city people and don’t consider their actions as carefully as we do. Besides, there weren’t too many empty hotel rooms in those parts, and “the ground was wet with dew”, as Wildenvey says. Meanwhile, Gruvik had an intuition that the presumptuous pair had sought refuge in his cabin; he went up there posthaste and caught them in the act. Tore Gruvik must have been a zealous man and thought that he who loves his sister should discipline her promptly, so he chopped off both her head and her lover’s and threw their bodies into Blue Lake.’

Instinctively I moved closer to the fire.

‘But that deed was too great a strain even for a tough guy like Tore Gruvik. The next two days he wandered around restlessly in the forest, and on the third he went insane, just plain crazy. That day he followed his victims: his guilty conscience drove him to suicide, and he drowned himself in Blue Lake. Another – and possibly less reliable – version of the story says the devil himself came for him that third day and took him down to Hell, which according to some local experts lies directly beneath that lake. Which explains the strange blue glow in the water; it’s supposed to come from the eternal blue fire said to burn down there. The locals certainly aren’t lacking in imagination. The popular superstition – ’

‘Don’t talk about superstition in this case,’ interrupted Mørk. ‘It’s modern materialism that’s superstitious. The popular imagination draws on secret, occult sources, forgotten worlds of wisdom, kingdoms that are off-limits to those with narrow, mechanical ways of thinking. The average farmer knows far more about the spiritual world than twenty-seven university professors put together.’

‘Were the bodies found?’ I asked.

‘No, they were never found. Blue Lake is said to be bottomless; those who drown in a lake like that one keep on sinking and sinking – down to the center of the earth, for all I know. I’m not an expert on that kind of thing. But now we come to the point. The popular superstition – sorry, Mørk – has added a juicy little postscript to the story: it claims that Tore Gruvik returns from the dead. Well, maybe that’s not so remarkable; in the country about every other person returns after their death, and any halfway respectable farm has its resident ghost. But Tore Gruvik is no ordinary phantom; he doesn’t manifest externally, in the outer world, clad in a sheet and with all the conventional trappings, bones, rusty chains, and so on. He shows himself – if you will – from within.’

‘What’s that supposed to mean?’

‘The legend says a curse has hung over the cabin ever since Gruvik’s death. Anyone who stays within its four walls falls victim to that curse. They become possessed by Gruvik’s evil spirit – he comes to them at night, from within, like a terrible force sucking at their souls. He draws them to him, fills them with his own curse, his own madness; he sucks them all down with him into the lake.’

‘No! Stop with this horrible story,’ cried Liljan, sticking her fingers in her ears. ‘I don’t want to hear any more.’

‘But I want to tell,’ said Gran, smiling. ‘Anyone who spends the night in the cabin, in other words, becomes possessed by a sort of suicidal mania. After a few days an unknown and intangible force compels them to drown themselves in the Blue Lake. During the last century, three people – two from Oslo – are said to have stayed at “Dead Man’s Cabin” a few years apart, using it as a base for grouse hunting. All three disappeared up there, one after the other. One of them was found later; he had drowned himself in a shallow part of the lake where the bottom is fairly firm. I’ve personally talked to one of the man’s descendants and know that the story jibes on this point. Maybe you can see why people in those parts avoid that house like the plague, and why it’s sat unused for over a generation; they haven’t even dared to tear it down. But then Bjørn Werner, the 20th-­​century man, turns up, buys the old enchanted castle, and will travel there the day after tomorrow to put his nerves of steel and concrete to the test . . .’
Limited Edition Hardcover:
250 numbered copies
Smyth-sewn, cloth bound book with dust jacket
Heavyweight acid-free paper, ribbon bookmark, foil stamped spine
List price $59, preorder price $49
Estimated shipping date February 2022
Valancourt Books | PO Box 17642, Richmond, VA 23226 | 804.873.8528 | email
Copyright © 2022 by Valancourt Books, LLC. All rights reserved. Valancourt Books® is a registered trademark of Valancourt Books, LLC.
Banner art by M.S. Corley