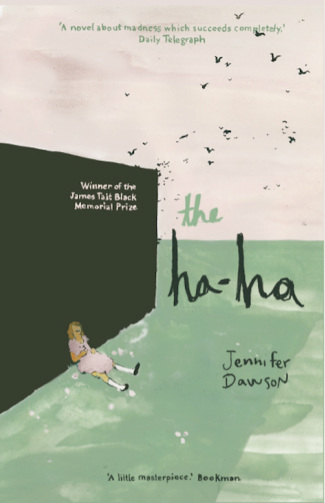 ‘I wanted the knack of existing. I did not know the rules.’ So says Josephine, the heroine of Jennifer Dawson’s remarkable novel, an exploration of a young woman’s mental illness that met with universal critical acclaim and won the James Tait Black Memorial Prize as the best novel of the year. After suffering a breakdown following the death of her mother, Josephine finds herself confined to an institution where patients are ‘treated’ by such means as electroshock therapy and lobotomies. But when she falls in love with Alasdair, a fellow patient she meets on the grassy bank of the ha-ha, she decides that her recovery will be on her own defiant terms. Inspired by the author’s personal experiences, The Ha-Ha (1961) remains a moving and powerful examination of mental illness and the treatment of those who suffer from it. This new edition includes an afterword by the author and an introduction by John Sutherland.

‘A very fine first novel. Dawson writes very well, with a tender awareness of the ironies of her theme and a poetic perception of how tremulous is the distinction between the mad world and the sane.’ - Glasgow Herald

‘A remarkably talented first novel ... Miss Dawson is neither sentimental nor sensational ... Her heroine is a convincing and sympathetic character, and when her mind begins to shift into the nightmare perspective of schizophrenia the writing creates an atmosphere of quiet terror.’ - Observer

‘Cool, short, tender and occasionally as prettily ruthless as the impact of a stiletto heel . . . twice as alarming because everything is implied rather than explicit.’ - Tatler

‘A novel about madness which succeeds completely.’ - Daily Telegraph

Jennifer Dawson was born in London in 1929. She attended school in Camberwell and went on to read Modern History at St Anne’s College, Oxford. In 1951, while at Oxford, she suffered a breakdown and was hospitalized for several months, an experience that helped inspire her first novel, The Ha-Ha (1961). She returned and took her degree in 1952, and afterwards worked for Oxford University Press. The Ha-Ha, published by Anthony Blond, was met with near-universal critical acclaim and won the James Tait Black Memorial Prize as the best work of fiction of 1961. The novel was also adapted for the stage and for radio. Her next book, Fowler’s Snare (1962), won the Cheltenham Festival Award, and Dawson went on to publish six further volumes of fiction over the next three decades, the final of which was Judasland (1989), which won the Fawcett Prize.

Dawson was committed to the cause of nuclear disarmament and met her husband, Michael Hinton, an Oxford philosophy don, during the 1963 Aldermaston march. She remained active in the peace movement in the Oxfordshire village of Charlbury, where she lived the last twenty years of her life. Jennifer Dawson died in 2000.

For more information, see the website created by Dawson's family: