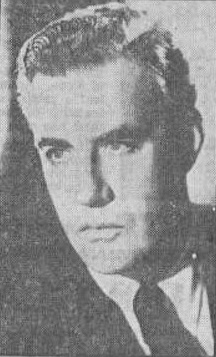 Walter Baxter was born in 1915. During World War II, he was a commander in the British Army and served in Burma, taking part in the fighting retreat when the Japanese invaded. Later, he served as aide-de-camp to General Slim of the 14th Army; his wartime experiences would provide the basis for Look Down in Mercy (1951).

Returning to London after the war, he worked briefly in his family’s business before deciding in 1949 to pursue a career in writing. Around the same time, he converted to Catholicism and volunteered as a missionary with the Jesuits at a jungle mission station in India.

Baxter’s first novel, Look Down in Mercy, was published to widespread acclaim in both the United Kingdom and the United States, and he was immediately hailed as a young writer of immense talent and promise. His next novel, The Image and the Search (1953), was more controversial and landed both Baxter and his publisher, the firm of William Heinemann, in court on criminal obscenity charges. After two trials, Baxter was acquitted, but, disheartened by his ordeal, he never wrote another book.

Christopher Isherwood records in a diary entry for 1961 that Baxter had “become a rather tragic self-pitying drunken figure with a philosophy of failure,” but nonetheless Baxter enjoyed great success as a restaurateur, owning a French restaurant, the Chanterelle, in South Kensington, which was very highly regarded. In 1962, Baxter met the chef Fergus Provan and the two would become companions for the rest of Baxter’s life; Provan would also take over the running of the Chanterelle after Baxter’s retirement. Walter Baxter died in 1994.