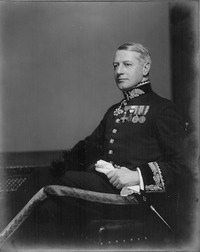 Sir Arthur Ronald Fraser was born in 1888, the fourth son of an Inverness-shire cloth merchant who had moved to London. Fraser had a conventional education at St Paul’s School, but by his early teens was writing poetry, which was published in the Westminster Gazette, much to his family’s amusement. At eighteen he was put to work in an insurance company, but in his spare time read at the British Museum; he was particularly interested in Buddhism. He served in the First World War and was in the trenches by November 1914. He was seriously wounded at the battle of Beaumont Hamel and invalided out. He made his career in the overseas section of the Department of Trade, and in the Foreign Office, serving in Argentina and France as the Commercial Minister in the British Embassies there, and later as a Government Director of the Suez Canal, when he was resident in Egypt. His knighthood in 1949 was one of several decorations in recognition of a distinguished diplomatic career. He published twenty-seven novels between 1924 and 1961 and in later life became involved in the New Age movement, running a healing and meditation centre with his partner Ingrid from a temple attached to his home. He died in 1974.