Gerard Sorme is a lonely young Londoner at work on his first novel, in which he intends to express his belief in the meaninglessness of life. He finds his life changing in new and unexpected ways when he begins an intimate friendship with Austin Nunne, a wealthy and charming gay man with violent sexual desires, and meets Nunne’s circle of friends: Gertrude, his well-meaning but naive Jehovah’s Witness aunt, the ugly but kindly Father Carruthers, and a strange and fanatical artist named Oliver Glasp. Meanwhile, though, someone else is busy exposing life’s meaninglessness in a different way: a serial killer is brutally murdering women in Whitechapel in a manner reminiscent of the Jack the Ripper slayings. The police suspect a crazed sex maniac, but Gerard has his own theory of the killer’s motives. As the killings continue and the investigation proceeds, Gerard suddenly finds himself haunted by a terrible suspicion: could his new friend Austin Nunne have anything to do with the crimes?

Colin Wilson’s classic first novel, Ritual in the Dark (1960), remains a chilling page-turner, a brilliant fusion of thrilling murder mystery and existential philosophy. This edition is newly typeset from the first London edition and includes the author’s introduction to the 1993 edition and a new foreword by Wilson scholar and bibliographer Colin Stanley.

‘Mr Wilson's vitality comes through. He writes a clear, light prose, and he makes his interests, however bizarre, seem important.’ – Punch 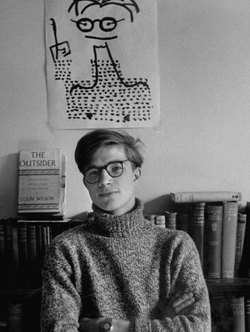 He continued to write prolifically in numerous genres, both fiction and nonfiction, including works on the occult, crime, and serial killers. His prolific output of fiction includes two subsequent novels featuring Gerard Sorme, the protagonist of Ritual in the Dark---Man Without a Shadow (1963) and The God of the Labyrinth (1970)—as well as novels in the vein of H. P. Lovecraft, including The Mind Parasites (1967) and The Philosopher's Stone (1969).