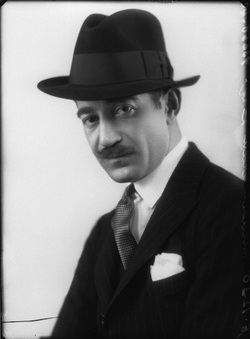 Michael Arlen was born Dikran Kouyoumdjian in Bulgaria in 1895 to an Armenian merchant family. In 1901, his family moved to England, where Arlen went on to attend school at Malvern College. He enrolled as a medical student at the University of Edinburgh but did not stay long, deciding instead to move to London and make a living by writing. His earliest magazine contributions were under his birth name, but with the publication of his first book, London Venture (1920), he adopted the pen name of Michael Arlen, and in 1922 when he was naturalized as a British subject, he legally changed his name to Michael Arlen.

Arlen’s first books enjoyed some success, but his 1924 novel The Green Hat was a runaway worldwide bestseller. The novel was adapted for the stage on Broadway and in London’s West End and was the basis for a silent Hollywood film starring Greta Garbo. The Green Hat made Arlen rich and famous almost overnight, and he became an international celebrity.

In 1927, Arlen, feeling ill, joined D.H. Lawrence in Florence, where the latter was working on Lady Chatterley’s Lover, in which Arlen would later find himself portrayed as Michaelis. The following year, Arlen married Countess Atalanta Mercati in Cannes; they had a son and a daughter.

Arlen continued to write during the remainder of the 1920s and 1930s, but none of his works met with the same success as The Green Hat. When Arlen found his loyalty to England questioned during World War II, he and his family moved to New York, where during the last ten years of his life he suffered from writer’s block. He died of cancer in 1956.