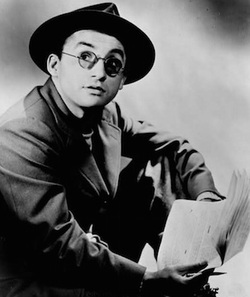 Arch Oboler was born in Chicago in 1907, the son of Jewish immigrants from Latvia. He grew up a voracious reader and early turned to writing, selling his first story when he was ten.

Recognizing radio as a powerful medium for storytelling, Oboler began writing radio scripts in his twenties, selling his first, Futuristics, to NBC in 1933. His big break came in 1936 when Wyllis Cooper departed the popular weekly radio horror program Lights Out and NBC invited Oboler to replace him. His first play, Burial Services, which ended in a young girl being buried alive, proved too much for audiences, and afterwards Oboler toned down the horror, relying largely on the strange and fantastic. But despite the show’s extreme popularity, what Oboler really wanted to write about was Fascism, which he saw as more horrifying than any of the imaginary terrors on Lights Out.

During the 1930s, Oboler wrote and directed radio plays for other programs, often working with the premier stars of the day, such as Bob Hope, Gary Cooper, and Mae West. After Pearl Harbor, Oboler was able to realize his goal of writing anti-Fascist plays and created the new series Plays for Americans, weekly stories laced with wartime propaganda, starring James Stewart, Bette Davis, and others. He also revived Lights Out, working anti-Nazi messages into the weekly episodes.

Like Orson Welles, Oboler made the jump from radio to film; his directing credits include Bewitched (1945), a film noir about a murderer with a split personality that pre-dated Psycho by fifteen years; Five (1951), a post-apocalyptic science fiction film; and Bwana Devil (1952), the movie that sparked the 3D craze of the 1950s.

Oboler also wrote one drama for Broadway, Night of the Auk (1956), directed by Sidney Lumet with an all-star cast that featured Claude Rains, Christopher Plummer, and Dick York. Though it ran for only eight performances, one critic compared it favorably with another of that season’s plays, Eugene O’Neill’s A Long Day’s Journey into Night; it was revived in New York in 2012. In 1969, his only novel, House on Fire, was published and earned comparisons to Ira Levin’s Rosemary’s Baby. Oboler died in California in 1987, aged 79.