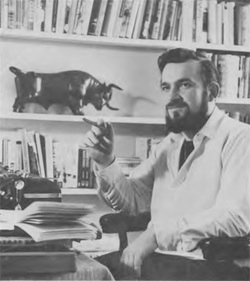 Alex Hamilton was born in 1930 and was educated first in South America, then England and Oxford University. After experimenting with a wide variety of jobs, he turned to writing full-time in the early 1960s, beginning by alternating novels with short story collections such as Wild Track (1963), which, although not macabre, caught the attention of Herbert Van Thal, editor of the popular Pan Books of Horror Stories series. Hamilton went on to contribute stories to this and many other series, including his most celebrated, ‘The Attic Express’, and in 1966 he published his own collection, Beam of Malice, which won widespread acclaim in both England and the United States. During the 1960s and ’70s he also edited several collections of macabre and horror fiction containing early works by many important writers, including William Trevor, Anthony Burgess, Robert Nye, and Michael Moorcock, among others.

His last novel, The Dead Needle, was a macabre blend of fantasy and reality, but after publishing his third collection, Flies on the Wall (1972), Hamilton, now with a growing family to feed, worked increasingly in journalism, most notably for the Guardian, where he wrote about books and publishing as well as travel (in which he won several awards) for twenty-five years, and for the BBC World Service. Recently, a collection of Hamilton’s interviews with a remarkable array of authors over a fifty-year span, from Dennis Wheatley and John Wyndham to Gunter Grass and Chinua Achebe, was issued by Troubador.

Widely praised when first published, Hamilton’s short stories fell into a long period of neglect but are now being rediscovered, with a hardcover edition from the esteemed Ash-Tree Press in 2007 and recent praise from Britain’s foremost living horror author, Ramsey Campbell.